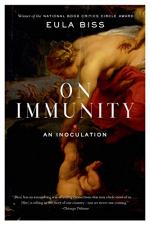 Related Topics
Having and Being Had

Eula Biss
This Study Guide consists of approximately 37 pages of chapter summaries, quotes, character analysis, themes, and more - everything you need to sharpen your knowledge of On Immunity.

On Immunity Summary & Study Guide includes comprehensive information and analysis to help you understand the book. This study guide contains the following sections:

This detailed literature summary also contains Topics for Discussion on On Immunity by Eula Biss.

That being a new mother is the most challenging and difficult transition that a woman will ever make is underscored in On Immunity by Eula Biss. The author is the daughter of a physician father and poet mother. The legacy she gains from the two disciplines is obvious throughout the work. As a child she was exposed to the story of Achilles, a metaphor that her father used to drive home the importance of immunity and the dangers of not being fully protected by vaccination. Her literary heritage directly from her mother is obvious in the metaphoric examples that are replete throughout the book and her somewhat lyrical approach to the world of science.

Having the benefit of her oncologist father’s wisdom and experience, Eula understood the topic of immunology at a higher level than most of her peers. She understood that germs and bacteria that largely held no danger were literally everywhere. And Eula also understood that there were good and bad germs. The topic of bad germs is known to everyone and needed no explanation. But good germs were those upon which natural immunities were structured in the body and in some cases taught immune systems how to be most effective.

But her wealth of knowledge from her father and her ability to think in the abstract that she gained from her artistic mother were not enough when she herself became a new mother. She may have suffered from a bit of postpartum depression because her obsession as described to keep her son safe and healthy went beyond most expected and normal levels.

Eula Biss dug into the pass to learn the history of inoculations and vaccines. She found that reactions to the vaccination process even centuries before were viewed in diverse ways by the parents of young children. There was always fear of injecting a foreign substance into a child’s body. The process of variolation was created hundreds of years ago in Africa. The process involved the injection of a miniscule amount of tissue from a diseased person into the body of a healthy child or person. Amazingly, this concept has been proven beneficial and is the fundamental of advanced inoculation processes in today’s world.

As a young adult Eula witnessed the bigotry and panic that resulted from the AIDS epidemic. As a young mother, she dealt with the strong opinions of anti-vaccination activists who believed that vaccinations, especially the MMR inoculation, was responsible for inflicting children with disease, in particular autism. The debate still rages. Many activists are parents of autistic children who cannot accept that it was nature that betrayed them; it is more satisfying to blame their child’s affliction on manmade solutions.

Bottom line, the influence that science had on Eula’s mindset led her to make sure that her son had the advantage of every recommended vaccination. The artistic side of Eula Biss understood and sympathized how others felt and left an opening for new evidence that peril exists in the inoculation process.

More summaries and resources for teaching or studying On Immunity.

On Immunity from BookRags. (c)2022 BookRags, Inc. All rights reserved.