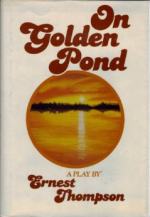 Ernest Thompson
This Study Guide consists of approximately 62 pages of chapter summaries, quotes, character analysis, themes, and more - everything you need to sharpen your knowledge of On Golden Pond.

(Richard) Ernest Thompson was born on November 6, 1949, in Bellows Falls, Vermont. His parents were Theron, a college professor and administrator, and Esther, a teacher. Esther played the piano and the violin, instilling the importance of music in their home. Thompson spent his early childhood in New Hampshire and Massachusetts and his teenage years in Maryland. His family often visited a lake in Maine during the summers.

Thompson attended the University of Maryland (1967-1968), Colorado College (1969), and Catholic University (1970) and received his bachelor's degree in 1971 from American University. After graduating, Thompson worked as a stage and television actor before becoming a playwright in 1977. Over the course of his career, Thompson has worn various hats in the television and film industry. His television work included two years spent acting on the NBC daytime drama Somerset. Although Thompson enjoyed acting, his desire to write scripts emerged...