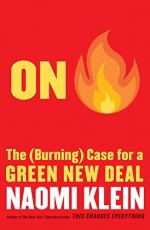 On Fire: The (Burning) Case For a Green New Deal Setting & Symbolism

In the introduction, Klein writes with admiration of the global Youth Climate Strike that took place on March 15, 2019. It is estimated that 1.6 million students in 125 countries walked out of their schools to protest ongoing climate change inaction, inspired in large part by Swedish teenage activist Greta Thunberg. Klein notes that the strike occurred on the same day that a white supremacist terrorist opened fire in two mosques in Christchurch, New Zealand killing 52 people, and posits that these are two polar opposite reactions to the same crisis—the students were reacting to climate change with justifiable anger and fear about their futures, while the shooter's murderous xenophobia was in response to resource scarcity and the increased number of refugees seeking shelter in Anglosphere countries.

Klein uses the term "Anglosphere" to refer to the United States, Canada, Australia, and the United Kingdom. Essentially, these are the...

On Fire: The (Burning) Case For a Green New Deal from BookRags. (c)2023 BookRags, Inc. All rights reserved.