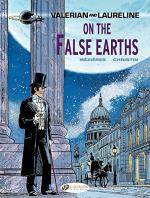 Pierre Christin
This Study Guide consists of approximately 26 pages of chapter summaries, quotes, character analysis, themes, and more - everything you need to sharpen your knowledge of On False Earths.

This detailed literature summary also contains Quotes and a Free Quiz on On False Earths (Valerian) by Pierre Christin.

As the novel opens, Valerian is in India when he announces that he has recovered some coordinates shortly before being shot during a battle. It is only later that the reader begins to realize that this is really a clone of Valerian. The original Valerian is safe aboard his spaceship. A short time later, another Valerian clone is in England. This time, he is killed soon after getting the coordinates.

Aboard Valerian's spaceship, a historian named Jadna is talking with Laureline. The two women prepare yet another clone and send it into the next situation. This time, the cloned Valerian is sent to America in the early 1900s. He is shot before he can accomplish anything. Back aboard the spaceship, Laureline and Jadna prepare the next clone. This one questions Laureline before she and Jadna send him out to find the next set of coordinates. He learns from the previous clone's mistake and does get the coordinates.

The coordinates take Jadna, Laureline, and Valerian nearer to the Egg Alien who has been creating these replicas of Earth. (Editor's Note: The alien is never named, but it is shaped like an egg. For the purpose of clarity in this study guide, he is referred to as the Egg Alien.) Upon their arrival, the alien creates a replica of World War I. Jadna sends all the remaining clones of Valerian into the battle while she makes contact with the alien.

The Egg Alien says that everything on his planet is boring and that he has his parents' blessing to go on this adventure. He reveals that he was the one who stole items of historical value from Earth's current civilization, known as Galaxity. The Spatio-Temporal Agency had approved Jadna's involvement in a mission to track down the alien, all because everyone was afraid that the alien presented a danger to Earth. Laureline insists the Egg Alien restore their spaceship so they can leave. Knowing that Jadna was only using the mission for her own historical knowledge, Laureline leaves her behind with the Egg Alien.

As Valerian recovers from being cloned multiple times, Laureline makes plans for a short vacation. As the novel comes to a close, she and Valerian are dressed in period clothing, enjoying refreshments on a patio with several other happy people.

More summaries and resources for teaching or studying On False Earths (Valerian).