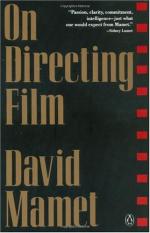 This detailed literature summary also contains Topics for Discussion and a Free Quiz on On Directing Film by David Mamet.

In his book, "On Directing Film" famed writer/director David Mamet lays out his theories and his path to them in an informative, straightforward and entertaining manner. Mamet's book is based on a series of lectures before students of the Columbia University Film School. These discussion sessions are an enjoyable aspect of Mamet's book. While they provide a good dose of technical and theoretic information, they give insight into Mamet's style as an open and flexible artisan, characteristics essential for the successful film director.

The prolific Mamet certainly has the credentials to teach about writing and story construction. At the time of the book's publication, Mamet had written many notable screenplays including "The Verdict," "The Untouchables," and the modern version of "The Postman Always Rings Twice," to name just a few. He had also directed two major movies, "House of Games" and "Things Change." Prior to his film making work, Mamet was a playwright with a dozen plays to his credit including "Glengarry Glen Ross" for which he won the coveted Pulitzer Prize and the New York Critics Award.

Mamet references and quotes many literary and cinematic icons to support his theories in film making. He stresses the necessity of keeping the film true to the story, setting aside both the screenwriter's and director's egos. To add weight to this point, he quotes both iconic writer Ernest Hemingway and legendary philosopher Aristotle to help make his case. He quotes Hemingway on the subject of writing as, "Write the story, take out all the good lines, and see if it still works." Aristotle cautions the writer that the focus of a story lies in what happens to the hero not what happens to the writer.

Mamet views the director as the Dionysian extension of the screenwriter. That is, the director takes the flat, skeletal outline that is a screenplay and gives it life and dimension. However, the good director does not change the story for his own purposes. Film is a design based on the blueprint that is the screenplay. If the director diverts from the story to "make a statement" or create "performance art" he has violated the storytelling and has not done his job. Mamet sees the audience as smarter than the filmmaker. They want the story to progress and come to an end. The human mind deals with things in a finite manner. There's a beginning and an end. The successful film satisfies that basic human need. Those films that divert from that recipe do not stand the test of time and collapse under their own deception.

The overarching point that Mamet consistently makes throughout the book is the necessity of the director to stay true to the story, doing his homework pre-production and most importantly presenting a succession of uninflected images juxtaposed in a comparative manner that will move the story forward for the audience.