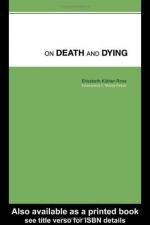 Elisabeth Kübler-Ross
This Study Guide consists of approximately 31 pages of chapter summaries, quotes, character analysis, themes, and more - everything you need to sharpen your knowledge of On Death and Dying.

On Death and Dying Summary & Study Guide includes comprehensive information and analysis to help you understand the book. This study guide contains the following sections:

This detailed literature summary also contains Topics for Discussion and a Free Quiz on On Death and Dying by Elisabeth Kübler-Ross.

A classic in the study of death, dying and grief, this first effort by Elisabeth Kubler-Ross provides the first glimpse at the true feelings and experiences of people in the process of dying. Written in 1969, Kubler-Ross uses material gathered from her many seminars and interviews with terminally ill hospital patients and in a groundbreaking gesture, suggests to the reader that instead of ignoring, avoiding or isolating the dying patient, it is important to understand the stages of grief and to allow the patient to talk openly and honestly about his situation. In earlier times, death was not a subject to be discussed aloud, and was such an uncomfortable topic, that a dying patient was not free to share his feelings, anxieties, anger and transitions with even his loved ones. Kubler-Ross presents some new possibilities, that perhaps a dying patient feels lonely and isolated, and the awkward non-communicative way we treat the dying can be transformed to help the patient feel a sense of completion, comfort and peace at the end of his life.

With the help of four theology students, Elisabeth Kubler-Ross undertook a project that involved providing seminars at hospitals to help people with the process of death and dying. In addition, the group provided one-on-one interviews with patients and their families in an attempt to help them spell out their worries, frustrations, fears and undelivered communication. They found simply listening to the patients discuss openly and frankly the prospect of their own deaths was quite calming for the patients and perhaps, helped them to move on to the preparatory stage of grief, which coincides with the final stage of acceptance.

Death is a topic difficult for even the strongest people to discuss when it affects them personally. Often, terminally ill patients are avoided by their families, isolated and lonely, because it is too difficult for relatives to communicate openly about the situation. Kubler-Ross found patients are often eager to talk about what has happened to them, and the issues among their family members that may otherwise be left unresolved. Moreover, terminally ill patients wish their doctors would be forthright with them, and express their sadness and anger over the occasionally lax treatment they receive at the hands of nurses and other hospital staff.

The author's now-famous five stages of dying or grief, have been incorporated into hospice studies and, although they are perhaps presented too rigidly, they are based on the Kubler-Ross's extensive work with many terminally ill patients. Kubler-Ross wants us to know that, although there is no set, proper way to die, the stages of grief are fairly common, and apply not only to the dying patient, but the family as well.

The thrust of her message with this book is to encourage us to talk to the dying and listen to the dying patient, giving them whatever help they need to express their feelings and wishes, and helping them to resolve the final issues that are keeping them alive or in discomfort. Perhaps more importantly, we should not avoid a dying person, but sit with them, hold their hands, and just be a source of silent strength that will allow them to complete their process with dignity and in peace.

More summaries and resources for teaching or studying On Death and Dying.

On Death and Dying from BookRags. (c)2022 BookRags, Inc. All rights reserved.