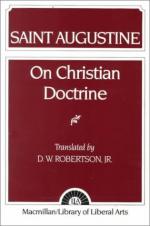 Augustine of Hippo
This Study Guide consists of approximately 22 pages of chapter summaries, quotes, character analysis, themes, and more - everything you need to sharpen your knowledge of On Christian Doctrine.

This detailed literature summary also contains Topics for Discussion and a Free Quiz on On Christian Doctrine by Augustine of Hippo.

De Doctrina Christiana was written by the great philosopher, theologian and Bishop of Milan, Augustine of Hippo, around the beginning of the fifth century A.D. He wrote it for a variety of reasons, but three predominate: (i) he wanted to convince those who thought they could simply divine the meaning of Scripture to study and pay heed to interpretation, (ii) he wanted to teach principles of Scriptural interpretation and encourage the study of subjects that aid Scriptural interpretation, and (iii) he wanted to teach Christian speakers about the skills and practices of a good Christian orator. The writing of De Doctrina Christiana was halted when Augustine became Bishop of Milan, but he later resumed it, so the book has a certain divide in its structure, one, however, that is a bit hard to notice. The book was left unfinished.

De Doctrina Christian contains a preface and four books. In the preface, Augustine responds to what he anticipates will be three types of critics of his work; the most important is the third type of critic— one who believes he does not need to study Scriptural interpretation to understand Scripture. Augustine seeks to convince this type of critic to take Augustine's writings seriously. In Book One, Augustine sets out the nature of his aims. He divides entities in reality into things and signs and says that Scripture contains both. Distinguishing between these two ideas is crucial. Further, he argues that signs come in a variety of ways - some literal, some figurative, some ambiguous, some unrecognized. He then proceeds to argue that to interpret Scripture one must possess the theological virtues of faith, hope and love and understand that the message of Scripture is what he calls "the law of love" or the Christian principle of loving God and one's neighbor.

Book One also addresses the nature of things. In Book Two, Augustine focuses on the meaning of signs as signs and develops a conceptual framework for analyzing signs in detail. He is most concerned to help the reader analyze unknown signs. Words are signs in the capacity of signs in that they are only used as signs. And to understand the words of Scripture, the student of Scripture must know many different fields of study, including philosophy, history and many languages. In Book Three, Augustine handles the difficult topic of ambiguous signs, deepening the distinction between figurative and literal passages, teaching his reader how to distinguish them and how to divine the meaning of ambiguous passages. He then provides a detailed account of how to understand what a figurative expression means and discusses the exegetical rules Tyconius, an earlier exegete and a Donatist, laid down for Scriptural interpretation.

Finally, in Book Four, Augustine turns to teaching Christian speakers how to communicate rightly-interpreted Scripture. The Christian must use rhetoric and oratory, which can be used for good as well as evil. He must become a master of eloquence if he is able and use his abilities to teach the truth to the laity. Further, he must be a man of upright behavior so as not to undermine his speech.

More summaries and resources for teaching or studying On Christian Doctrine.