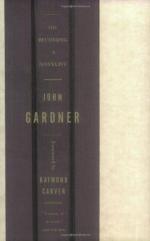 John Gardner
This Study Guide consists of approximately 29 pages of chapter summaries, quotes, character analysis, themes, and more - everything you need to sharpen your knowledge of On Becoming a Novelist.

On Becoming a Novelist Summary & Study Guide includes comprehensive information and analysis to help you understand the book. This study guide contains the following sections:

This detailed literature summary also contains Topics for Discussion and a Free Quiz on On Becoming a Novelist by John Gardner.

On Becoming a Novelist by John Gardner seeks "to deal with, and if possible get rid of, the beginning novelist's worries." It shows this narrow audience the highs and lows of a career that in the end provides spiritual joys that no non-novelist can imagine.

On Becoming a Novelist by John Gardner devotes half its pages to describing "The Writer's Nature." An aspiring novelist should measure himself or herself against five criteria and work on developing those talents. The marks of a promising novelist are: verbal sensitivity and facility, accuracy and freshness of eye and ear; a storyteller's special intelligence (related to childishness); and "daemonic compulsiveness" to stay the difficult course. None is exclusive to novelists and not all successful novelists have and make full use of all of these traits, but they provide a useful way of measuring oneself—and alleviating natural worries.

Three of these natural worries is developed at length in a separate chapter. Gardner first looks at "The Writer's Training and Education." He debates the value and risk to one's talent of studying writing in college or graduate school, and concludes that a broad-based liberal undergraduate program heavy in literature, philosophy, psychology, with touch of science, helps open vistas for a novelist. The self-educated get stuck in their own time and space, having no larger perspective of human existence. Gardner also critiques writers' conferences, describing how to distinguish harmful from useful ones.

"Publication and Survival," seems written almost apologetically, as a necessary evil because young writers are obsessed with seeing their words in print. Throughout, Gardner emphasizes that it is more important to develop good skills and let publication take care of itself, but he demystifies the editorial process and the necessary work of agents.

Finally, "Faith" discusses dreaded "Writer's Block" and various ways of getting out of it, including having and following a sound plan for writing. This final chapter comes closest to being a book of craft by providing specific suggestions, but within the inspiring context of how a novelist stands to experience a spiritual reward unknown to non-novelists if they are, in fact, non-quitters.

More summaries and resources for teaching or studying On Becoming a Novelist.

On Becoming a Novelist from BookRags. (c)2022 BookRags, Inc. All rights reserved.