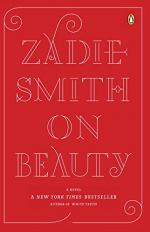 Get On Beauty from Amazon.com
View the Study Pack
Study Guide
Order our On Beauty Study Guide

Zadie Smith
This Study Guide consists of approximately 50 pages of chapter summaries, quotes, character analysis, themes, and more - everything you need to sharpen your knowledge of On Beauty.

On Beauty Summary & Study Guide includes comprehensive information and analysis to help you understand the book. This study guide contains the following sections:

This detailed literature summary also contains Quotes and a Free Quiz on On Beauty by Zadie Smith.

The following version of this book was used to create this guide: Smith, Zadie. On Beauty. New York: Penguin, 2005.

The novel, told from the third-person omniscient point of view, opens with an e-mail exchange between Jerome Belsey and Howard Belsey. Jerome is staying with the Kipps family in London during a semester abroad. He briefly becomes engaged to Victoria Kipps, and the rest of the Belsey family, who lives in Wellington react differently. Howard is the most enraged, as he is an academic rival to the patriarch of the Kipps family, Monty. Howard flies to London to put an end to the engagement.

Nine months later, it is summertime and Kiki is dealing with the aftermath of finding out Howard has had an affair. She takes a sulky Jerome to the Wellington town fair, where Kiki tries to flirt with a Haitian jewelry seller. She and Jerome run into Claire and Warren, old family friends who have just now gotten married.

In an attempt to act as a family, the Belseys go see a performance of Mozart’s Requiem in Boston. There, they meet a young black man from Roxbury, Carl. Levi, especially, is excited, as he dislikes living in such a heavily-white area.

The Kipps family moves to Wellington, as Monty is to be a guest lecturer at the college. The Belseys have an anniversary party, with many people from Wellington in attendance. Kiki sees Howard and Claire talking, and immediately realizes that Claire was the woman Howard had an affair with, only heightening her sense of betrayal.

In Part 2, Zora wrestles with her physical appearance. She runs into Carl again at the Wellington pool and her feelings for him begin to develop. Howard prepares for the new school year, and is shocked to see Victoria in his class. Zora manipulates Jack French, the Dean of Humanities, so she can be accepted into Claire’s exclusive poetry class. Kiki attempts to kindle a friendship with Carlene Kipps, and though they disagree about many things, Kiki feels they have a special connection. Levi quits his weekend job at a music store after his boss fails to honor Levi’s attempt at collective bargaining. He runs into a group of Haitian bootleggers and begins hanging out with them.

At home, Kiki and Howard are barely speaking and are hardly ever in the same room together. They have an explosive fight in which Howard is too cold and Kiki is too irrational. Their argument exposes resentment about Kiki’s body, her blackness, and Howard’s academic life.

One night, Claire takes her poetry class to a local club called The Bus Stop. Levi and his new group of friends perform a poem that slams the Haitian government. Carl performs, too, and is clearly gifted. After his performance, Claire asks him to join her class and he agrees.

After Thanksgiving, Victoria invites Howard to attend a formal dinner with her and he agrees. Meanwhile, Wellington politics are heating up for a big upcoming faculty meeting in which Howard and Monty will square off, and Claire will be defending “discretionary” students in her classes, such as Carl.

Just before Christmas, Kiki and Carlene go shopping in Boston. Carlene tries to entice Kiki to have a spontaneous weekend at the Kipps vacation home in Amherst. After refusing at first, Kiki agrees -- but Carlene’s family suddenly appears at the train station and takes her away.

In Part 3, both the Kipps and Belsey families are in London for Carlene’s funeral. Her illness turned out to be an aggressive cancer that she never told her family about. The Kipps family finds a note that leaves Carlene’s painting of Maitresse Erzulie to Kiki, but keeps this from her. At the funeral, Kiki is distressed. Howard feels ill and leaves the funeral preemptively. He ends up at his father’s home, and they are only able to talk briefly before arguing. Howard leaves and gets drunk at a pub before showing up to the wake. He finds Victoria in her room, and she is also drunk. Though Howard refuses at first, they eventually have sex.

Back in Wellington, the faculty meeting takes place. Howard gives his speech saying that Monty’s lectures should be made available beforehand so that Wellington can determine if they are appropriate and non-discriminatory. Monty’s rebuttal is much more polished, and he is the clear victor of the debate. The faculty agrees to let Monty proceed with his lectures. After this, Zora gives a speech in place of Claire, that successfully delays the vote on discretionary students.

That night, Howard escorts Victoria to the college formal. He is forced to leave, though, when a glee club gives a performance and he cannot hold in his laughter. Meanwhile, Levi is becoming increasingly involved with the plight of the Haitian workers in Wellington. His interest in street culture transforms from aesthetic to political. He becomes especially close to a worker named Choo, who he visits in Roxbury.

Zora becomes increasingly invested in Carl. She petitions Claire so ardently that Claire works out an arrangement for Carl to get a job in the Black Studies Department’s library. Carl loves his new job and feels proud to work for Wellington. Levi, however, is critical of this change. Zora’s feelings for Carl become evident as she frequently visits him at his new job and informs him of the progress on his case. Howard continues his affair with Victoria by meeting her at a hotel, but flees before they consummate. The next day, Victoria comes to his office and officially ends things between them. Back at home, he and Kiki have sex for the first time in months. When they finish, Kiki seems determined to end their relationship, but Howard begs for more time.

During spring break, Zora and Jerome attend a college party together. Carl and Victoria are also in attendance. Jerome walks in on Carl and Victoria having sex in the coat room. This leads to Zora dragging Carl onto the lawn and confronting him. A major fight ensues in which Zora tells Carl he does not belong at Wellington. In retaliation, Carl claims Wellington is a place of deceit. Though Victoria protests, Carl insinuates at Howard and Victoria’s relationship, and reveals Monty has been sleeping with Chantelle, a girl from Roxbury who is also in Claire’s class.

The next day, Zora is called into Wellington because the painting of Maitresse Erzulie has been stolen out of Monty’s office, and Carl is a suspect. Meanwhile, Kiki finds the painting under Levi’s bed. She confronts him, but Jerome finds a note card attached to the frame in which Carlene bequeaths the painting to Kiki. At the same time, Zora and Howard return to the house, and Zora confronts Howard about his affair with Victoria.

In the final chapter of the novel, Kiki and Howard are officially separated. Kiki has moved out of the house, and while everyone misses her presence, everyone is at peace now that the turmoil of their relationship has settled. Howard, too, is much more relaxed. He goes to Wellington to give a presentation that will determine whether or not he receives tenure. He sees Kiki smiling at him from the audience.

More summaries and resources for teaching or studying On Beauty.

On Beauty from BookRags. (c)2022 BookRags, Inc. All rights reserved.