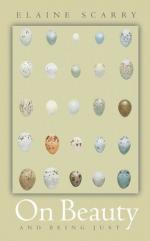 On Beauty and Being Just Summary & Study Guide

Elaine Scarry
This Study Guide consists of approximately 13 pages of chapter summaries, quotes, character analysis, themes, and more - everything you need to sharpen your knowledge of On Beauty and Being Just.

On Beauty and Being Just Summary & Study Guide Description

On Beauty and Being Just Summary & Study Guide includes comprehensive information and analysis to help you understand the book. This study guide contains the following sections:

This detailed literature summary also contains Topics for Discussion and a Free Quiz on On Beauty and Being Just by Elaine Scarry.

In On Beauty and Being Just, Elaine Scarry fights against the prevailing mid-1990s academic sentiment that beauty was not only unworthy of being studied but also potentially harmful or dangerous to appreciate in and of itself. She begins her argument with a section titled "On Beauty and Being Wrong," in which she examines how we perceive beauty - especially when we make a mistake in our judgments about what is or is not beautiful (she believes that more people have made mistakes in this area than in intellectual or academic matters). Scarry takes the example of a palm frond in Matisse's prints, which she never noticed at first; once she had seen the palm frond in one print, she saw more and more of them, eventually coming to notice that by the end of his career, this motif dominated more than half the surface area of his works. In this way, she makes the comparison with beauty, remarking that it is almost more jarring to see that one has been wrong about something being ugly than about something being beautiful

In the second half of this short text, "On Beauty and Being Right," Scarry flips her arguments around and, instead of discussing what beauty is not or errors we may make in judging beauty, discusses what it is and how we define it: in addition, she focuses particularly on the arguments used to discount beauty's value, notably that it distracts us from the ills of society and that it causes harm to the object or person being viewed. After categorically discounting these ideas, she moves on to the idea that beautiful objects, people, and ideas, rather than being harmful, actually inspire good to be done and lead to social justice. Her overarching argument is that the equilibrium of beauty precedes justice and lasts longer as it is not determined by human hands; in addition, beauty is perceptible to the senses. She concludes by remarking that we can see how important beauty is by observing our own attitudes towards beauty: we do not wish future generations to regard us as unappreciative of beauty, nor do we want them to be unappreciative of beauty. In addition, we would most likely choose for beauty to exist in the world - even if it were in a geographic location we would never see - than to not exist. Therefore, she finds beauty unlike other concepts and notes that there is no self-interest (or a different kind of self-interest) that it inspires in those who admire beauty.

More summaries and resources for teaching or studying On Beauty and Being Just.

On Beauty and Being Just from BookRags. (c)2022 BookRags, Inc. All rights reserved.