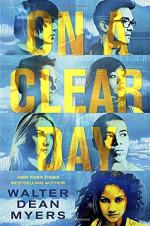 Walter Dean Myers
This Study Guide consists of approximately 33 pages of chapter summaries, quotes, character analysis, themes, and more - everything you need to sharpen your knowledge of On a Clear Day.

On a Clear Day Summary & Study Guide includes comprehensive information and analysis to help you understand the book. This study guide contains the following sections:

This detailed literature summary also contains Quotes and a Free Quiz on On a Clear Day by Walter Dean Myers.

“On a Clear Day” is a young adult dystopian novel by Walter Dean Myers that takes place in the late summer of 2035. In the Bronx, sixteen year-old Dahlia attends the funeral of her aunt, and believes that there is nothing in life worth living for. The people of the world are divided into classes based on wealth. There are the Favelos (the poor), the Gaters (low-middle class and upper-middle-class), and the elite. At the very top of society are the C-8 companies, who control everything in the world from food production to medicine to the internet. These companies dictate much of everyday life, and they heavily influence the national policies of most countries in the world. As a result, the class system resembles a caste system, and there is little upward mobility.

Dahlia, a brilliant mathematician, is contacted by the American Resistance, a group of young people in their teens and twenties dedicated to finding a way to break the power hold the C-8 have on the world. Michael and Javier, the leaders of the Resistance, entreat Dahlia to join them, and to attend a conference in London being hosted by the Eaton Group, the British equivalent of the Resistance. In addition to meeting with the British resistance and other resistance groups, Dahlia and the Americans also meet with the Sturmers, an American neo-Nazi muscle-for-hire group, and a terrorist warlord named Zayad. Both the Sturmers and the terrorists are self-interested and want to know how the American Resistance will fit into everything.

As time goes on, Dahlia, Michael, Javier, and the other members of the American Resistance uncover different clues and information, which is assembled by Dahlia, who runs mathematically-based projections based on these clues. A plot ultimately emerges in which the C-8 plans to make a 2% profit in the coming year–-something that has not happened at all since the world became “equal” under the C-8. Upon investigation, it is learned that one C-8 company, Natural Farming, intends to buy the medical research C-8 company, CTI, thus consolidating power and making more money. Upon further investigation, Dahlia and the others learn that Zayad is being used as a pawn to launch a terrorist attack in Miami, triggering a gang war that will obscure the corporate takeover. Zayad, in return, is to gain 3D printers which will allow him to produce weapons to continue his terrorist operations in Morocco. News of this is spread by the underground, which forces C-8 to cancel the merger.

The American Resistance gathers all of its members, and they organize themselves to prevent the terrorist attack. A battle rages between the Resistance and Zayad’s street gang allies and terrorist thugs. The first wave of the attack is beaten off, and the Sturmers arrive and finish off Zayad and the rest of his terrorist thugs. The mainstream media covers up the particulars of the attack, and Dahlia knows that the victory is only temporary. The C-8 will try for more power again soon. Even though all of the mysteries of the book are not fully revealed, Dahlia knows that will come soon enough.

More summaries and resources for teaching or studying On a Clear Day.

On a Clear Day from BookRags. (c)2022 BookRags, Inc. All rights reserved.