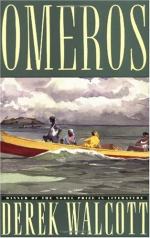 Austin Clarke's Growing up Stupid under the Union Jack, 1980, is a humorous account of a youngster's attempts to cope with the contradictions of colonial society in Barbados.

Nobel Laureate Seamus Heaney's play The Cure at Troy: a Version of Sophocles' "Philoctetes," 1991, focuses on the Greek character Philoctetes (who appears as Philoctete in Omeros). Heaney and Walcott are friends who have drawn from the same classical sources in these works.

George Lamming's novel In the Castle of My Skin, 1954, recounts an aspiring artist's experiences of village life in Barbados, similar in many ways to Walcott's Gros Ilet village in St. Lucia.

Rex Alan Smith's Moon of Popping Trees, 1981, is the book alluded to but not named in Omeros, from which Walcott reads about Catherine Weldon and the Sioux Ghost Dance.