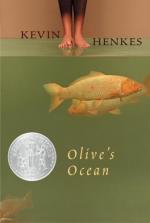 Kevin Henkes
This Study Guide consists of approximately 31 pages of chapter summaries, quotes, character analysis, themes, and more - everything you need to sharpen your knowledge of Olive's Ocean.

This detailed literature summary also contains Topics for Discussion and a Free Quiz on Olive's Ocean by Kevin Henkes.

Martha Boyle is out of school for summer vacation and she and her family are preparing for their annual trip to the ocean. One day there's a knock on the door and Martha answers to discover a woman standing there. The woman introduces herself as Olive Barstow's mother. Olive was in Martha's class at school but had been hit by a car while riding her bicycle and died only a few months earlier. Olive's mother tells Martha that she'd found a page in Olive's journal that she thought Martha should have. She hands Martha the page, says "thank you" to Martha, then leaves. Martha reads the journal entry and discovers that Olive hoped to be a writer, that she wanted to visit the ocean, and that he hoped above all else that she and Martha would become friends. Olive writes that Martha is the "nicest girl" in the entire class, a fact that catches Martha by surprise.

Martha says nothing to the others in the family about the strange visit from Olive's mother as they scramble to get ready to leave, but she thinks about it. She goes to the scene of Olive's accident without really considering what she'd expected to find, and finds nothing to mark the spot. The family then packs up to leave and soon arrives at the home of Martha's father. The bond between Martha and her grandmother, who she calls "Godbee," is strong. When Martha and Godbee begin a daily ritual of sharing information about themselves, Martha finds herself ready to confide her desire to be a writer. She also learns things about her grandmother, and comes to worry about Godbee's health. She becomes friends with a boy in the neighborhood but discovers that he's not what she expected, but she finds a true friend in another boy. While Martha is making these discoveries, she watches as her parents come to a new understanding that will change Martha's life.

Meanwhile, Martha is enjoying her time on the beach. One day she goes walking with her little sister, Lucy. Martha takes a clean baby food bottle along. As she scoops up a bottle of ocean water, the ground caves in and she spends a minute fighting for her life. She recovers and makes it out of the water but realizes that she could have died, just as Olive died and just as her grandmother will someday die.

Martha takes the bottle of ocean water home with her and goes to Olive's house only to find that Olive's mother has left. Not knowing what else to do with the water, she takes a seat on the porch and begins writing Olive's name with an old paintbrush. As she writes, the water evaporates, so that Martha writes it over and over again, until the water is gone.

More summaries and resources for teaching or studying Olive's Ocean.