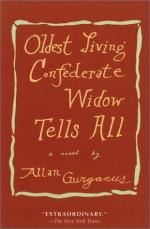 This detailed literature summary also contains Topics for Discussion and a Free Quiz on Oldest Living Confederate Widow Tells All by Allan Gurganus.

Oldest Living Confederate Widow Tells All, by Allen Gurganus, is the story of Lucy Marsden. She is the widow of the last surviving soldier of the Civil War. This is her story of slavery, the Civil War, family, sharecropping, and the South. The book opens with the death of her husband, Captain Marsden. He had been famous in the area with people coming to interview him and to take pictures. Lucy would prompt him to tell his battle stories for them. Lucy did this for the last thirty years of his life.

This book tells the story of two Civil Wars. The first is the one involving the conflict between the North and the South. Lucy tells the story of the slaves, like Castiglia, the burning of the plantations during Sherman's march, and the surrender at Appomattox. Her husband, Will Marsden, was thirteen years of age when he and his best friend joined the battle for the South. Ned was soon killed by a lake in Virginia and Will never recovered from the death.

The second war is on the domestic front in Lucy's own home. Lucy and Will fight the eternal male-female battle, which begins on their wedding night. Women were expected to do certain things and to behave in certain ways whether they wanted to or not. In spite of this, Lucy remained dedicated to her husband until the day he died.

Will became celebrated for his war stories. He was highly sought after for speeches and interviews. Lucy relates many of these stories in this book. The reader sees how Lucy's life long friendship with Cassie began. Cassie had been the personal slave of Will's mother, Lady Marsden and claimed to be an African princess. As Sherman's troops are approaching The Lilacs, the Marsden plantation, Lady Marsden wants to hear Cassie's story. Lucy relates the story at a latter point in the book.

After she was free, Cassie lived in Baby Africa where she had a mink farm. She used the pelts to make herself a mink coat over quite a few years. When Lucy was first brought to the Marsden house after her marriage, she was afraid of Cassie but was curious about her. When Will heard of Lucy wandering around Baby Africa, he fired Cassie. Lucy and Cassie's friendship began at this point.

Lucy tells her tales throughout the book. Will never got over the effects of the War Between the States and Lucy, who lived with the ghosts of that war, was constantly fighting the second war in her own home.