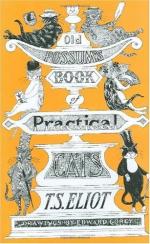 Blenkinsopp, Joseph. "Macavity and Moriarty." The Baker Street Journal 28 (1978): 103-104. A discussion of the influence of the Sherlock Holmes stories on Eliot.

Children's Literature 11 (1983): 109124. A reply to Hodge in which Douglass insists that Eliot's purpose is not to judge his Cats but to fantasize things normally forbidden to children, to stress the value of daydreaming, and to express "Eliot's love for dog-, cat-, and mankind, and his desire to keep alive in himself the irreverent child."