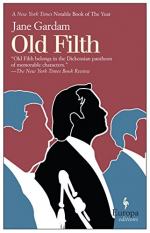 Jane Gardam
This Study Guide consists of approximately 84 pages of chapter summaries, quotes, character analysis, themes, and more - everything you need to sharpen your knowledge of Old Filth.

The following version of this book was used to create this study guide: Gardam, Jane. Old Filth. Abacus, 2004. Print.

Old Filth begins with a short ‘scene,’ in which four Benchers discuss an absent character by the name Old Filth (we later learn his name is actually Edward Feathers). We learn the Filth is an acronym—Failed In London Try Hong Kong—which describes this character’s career. The Benchers feel that Filth is an impressive man, but scoff at the idea of him being mysterious.

The next chapter shows us Filth himself, as an old man living in Dorset. He had a long and successful career as a lawyer in Hong Kong, but retired to Dorset with his wife Betty. His wife had died some years ago when Filth gained a new neighbor: his arch-nemesis from his days in Hong Kong, Terry Veneering. The two managed to ignore each other for two years before Filth got locked out of his house in the snow and was forced to pay him a visit. The two men had a surprisingly cordial visit before Veneering gave him an old key to Filth’s house that had been left behind, and so Filth was able to go home.

The novel then begins to alternate time periods, covering Filth’s childhood in some chapters (where he is largely referred to as “Eddie”) and Filth’s later life in Dorset (where he is referred to largely as “Filth”). The next chapter returns to the time of Filth’s birth in Kotakinakulu province in British-ruled Malaya (now Malaysia). A baby was born to Mrs. Feathers, the wife of Kotakinakulu’s British district officer. She named the baby Edward before she died. Auntie May, a Baptist missionary, delivered the baby back home to his father from the Port hospital at which he had been born. Alistair Feathers, the baby’s father, would not see his son, however, and so Eddie was raised by his wet-nurse’s then 12-year-old daughter Ada. After a very happy childhood amongst the Malayans, however, Eddie was ripped away from his home and sent to Wales for schooling. Filth recalls the boat ride over, where he got his first glimpse of British culture. The narrative picks up years later in Wales, when Eddie was taken away from his foster home where he had lived with his two cousins and brought to prep school.

The narrative returns once more to Dorset many years later, while Filth’s wife Betty was still alive. She had received a phone call from Terry Veneering, and we learn that the two had had an affair. Veneering was calling to say that his son had died, and the news affected Betty very deeply. Filth and Betty had had no children.

Back in Filth’s childhood, we visit the time after Eddie’s departure from Wales. Eddie went to prep school where he met his best friend, Pat Ingoldby, and Eddie subsequently became a close part of Pat’s family. It was an idyllic time for Eddie, but the onset of WWII casts an ominous tone upon his future. Years down the line, Betty thought of her past with Filth while planting her tulip bulbs. She hid the pearls Veneering gave her in the garden, thinking she would never get any closer to her husband now.

The onset of WWII brought much difficulty. Pat’s older brother Jack was first to die, and it was due to this family tragedy that Eddie realized that he was still an outsider, not completely part of the family. Eddie took his Oxford entrance exams, and secured himself a place there after the war. On the way back from Oxford, Eddie learned from a newspaper that Pat had also died in the war.

Betty had died while planting her tulips. After her death, Filth was thrown into a kind of frenzy. Determined to find something of his wife, Filth went to visit Babs, his cousin who he had been with in Wales and who had known Betty. He found Babs in a state of half-madness, however, and quickly left. He then visited Claire, another cousin from Wales who had known Betty, and found her in much better shape. He stayed with her for a few days. Claire’s son, Oliver, was set to make a trip to see his mother, but his partner Vanessa ended up coming at the last minute. Oliver took his mother to Cambridge, and Filth chatted with Vanessa, who was also a lawyer. Vanessa did not realize who Filth was, professionally, until after they had parted; Claire gave her some of Betty’s old jewelry, which Filth had given to Claire. Vanessa and Oliver got married and named their first child after Filth.

Book II opens with another ‘Scene,’ in which Benchers once again discuss Filth. He is present, though hidden from them, this time. Once again, they discuss the idea that Filth’s life had been very easy and boring.

Eddie’s father, who had fought in WWI, had decided to evacuate Eddie from Britain during WWII even though Eddie was close to fighting age. Eddie unwillingly boarded a boat to Singapore, where he met a character called Albert Ross, a half-Chinese dwarf who was younger - yet seemingly wiser - than Eddie and very cunning. Eddie got sick on bananas in Africa, but made it alright until the boat had to turn around in Singapore due to the Japanese occupation there. Albert Ross got off the boat in Singapore.

In his advanced age, Filth took a trip to Malmesbury, where he had served in the war, and revisiting the physical location brought back memories of that time in his life. As a young man, Eddie had been very sick on the way back from Singapore, and had to be quarantined for a long time upon his return. Once he had gotten better, he joined the army and was placed in Queen Mary’s guards in Malmesbury, where he became a favorite of the Queen and did very little fighting. When Filth returned as an old man, he sprained his ankle, though a kind girl and her grandmother gave him a nice tour of the place. Later, in his hotel, Filth believed himself to be having a heart attack, though it turned out to be only indigestion.

After the war, Eddie went to Oxford and passed the bar but found himself very disillusioned, working in a dingy office on cases that did not interest him or utilize his full potential. Albert Ross, however, soon came to the rescue and offered him a job in Hong Kong, thus beginning Filth’s long and successful career.

Filth’s ‘heart attack’ scared him, and so he decided he must confess the crime that had been haunting him his whole life. Babs and Claire’s priest come to visit him, and Filth and Babs together tell the story of Wales, how they were abused for four years and then murdered their abuser. Though they have been haunted by their actions, neither Babs nor Filth repent. With this, Filth felt himself freer, and planned one last journey back to Malaysia to revisit his roots. Stepping off the plane, Filth felt himself to be finally “Home.” The next chapter is another ‘scene,’ wherein we learn that Filth died soon after stepping off the plane; his reputation amongst his colleagues is already diminishing, and his amazing story has died with him.

More summaries and resources for teaching or studying Old Filth.