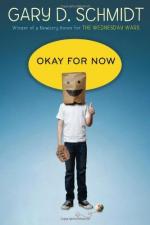 Gary Schmidt
This Study Guide consists of approximately 28 pages of chapter summaries, quotes, character analysis, themes, and more - everything you need to sharpen your knowledge of Okay for Now.

This detailed literature summary also contains Topics for Discussion on Okay for Now by Gary Schmidt.

Okay for Now is by then by award-winning author, Gary D. Schmidt. The author is the winner of the Newberry Honor for his novel The Wednesday Wars. The novel is set in Long Island and Marysville, which is in upstate New York in the Catskill Mountains. When the novel begins, it starts out in Long Island before the Swieteck family moves to Marysville in 1968. In this novel, Doug Swieteck, the youngest son in the family narrates the story. Doug is the only character that talks to the audience and the other members of the novel or his family, which consists of his father, mother and two older brothers. Part of the story includes the lives of the residents of Marysville when the Swieteck family moves there.

As the story unfolds, the audience learn about the family struggles and secrets in a light-hearted manner. The Swieteck family, or more specifically Doug's life, is symbolic of the title of the novel, Okay for Now because no matter where Doug and his mother are, as long as they are together, they say they are "okay for now." Doug seems to find a way to overcome the abuse in his own household and Doug's mother does too. Eventually, even the other two boys in the Swieteck family learn to be "okay for now" by learning to deal with the situation at hand in a positive manner and with a positive outlook.

Doug takes the readers through the various struggles and challenges the family faces, but from the perspective of a teenage boy. While the family struggles to make ends meet, there is also a focus on how Doug is handling an abusive father, finding his own identity, and falling in love for the first time.

More summaries and resources for teaching or studying Okay for Now.