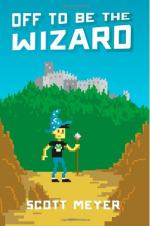 Off to Be the Wizard Summary & Study Guide

Scott Meyer
This Study Guide consists of approximately 38 pages of chapter summaries, quotes, character analysis, themes, and more - everything you need to sharpen your knowledge of Off to Be the Wizard.

Off to Be the Wizard Summary & Study Guide Description

Off to Be the Wizard Summary & Study Guide includes comprehensive information and analysis to help you understand the book. This study guide contains the following sections:

This detailed literature summary also contains Quotes and a Free Quiz on Off to Be the Wizard by Scott Meyer.

“Off to Be the Wizard” is a young adult science-fiction and fantasy new adult novel by Scott Meyer which follows the time-traveling Martin Banks as he uses a computer to send himself back to Medieval England. When the novel begins, 23-year-old Martin is messing around on the internet, hacking into websites. He hacks into the website of a cell phone company that made radios back in the 1930s, and discovers a large file called “Repository1-c.txt”. He scans for any information about himself as he does with all websites and finds data about himself. He decides to alter his height, and discovers that as he alters his height online, his height in reality is also altered.

Martin, having realized the repository file controls all of reality, realizes he can teleport himself including backwards through time. He also realizes he can adjust anything in his life, such as his bank account which he increases exponentially. He copies the Repository file onto his smartphone so that he can access it anywhere at any time. However, Martin’s manipulation of his bank account catches the attention of the Department of the Treasury, who, together with the Seattle police, go to arrest Martin. Martin escapes from jail by using the Repository file on his phone, shows up at his apartment, grabs a handful of things, and flees to his parents’ house to avoid the police. He tells his parents he is innocent of whatever the authorities will say, goes into his old bedroom, then transports himself back in time to the year 1150 in England.

A beautiful passing seamstress and tailor named Gwen gives Martin a lift in Leadchurch. There, at the Rotted Stump Inn, Martin announces he is a wizard. He is welcomed by Phillip, who also purports to be a wizard. Martin challenges Phillip to a duel, believing that Phillip is a fraud and that the Repository file will make victory possible. Phillip defeats Martin, but then takes Martin under his wing as an apprentice. Phillip reveals that there are dozens of people who have discovered the Repository, and have traveled back in time. Some twenty future people, posing as wizards, live across Europe. Most powerful is Jimmy, who works as an advisor wizard to King Arthur, and whom Phillip can’t stand for having too much influence and always taking credit for other people’s ideas. For example, Jimmy has convinced the King to change the name of London to Camelot, even though in the future, London is still called London. It makes Phillip believe that they are perhaps living in an alternate reality.

Phillip trains Martin, who then prepares for the trials. The trials will determine if Martin is allowed to stay in England or not. It all begins with the salutation, the welcoming banquet wherein all European wizards gather together to watch Martin’s introduction. Martin creates a massive statue of himself which does the robot. Everyone cheers and applauds. Phillip later reveals the trials are actually over: the welcoming and salutation, coupled with Phillip’s approval and trust of Martin, have earned Martin the right to stay. He reveals that wizards have three rules. They can only experiment on themselves. If they experiment on another, it must be consensual. If magic/the Repository are to be used as a weapon, it can only be in self-defense.

Gwen approaches Martin and his fellow local wizards to tell them that the families of Rickard’s Bend have all been killed. With no apparent cause of death, Martin, Phillip, and the others believe magic to be the cause. It is then that Tyler, a fellow wizard, is summoned. He reveals he had been rendered invisible by Jimmy after learning that Jimmy was trying to turn the people of Ricard’s Bend into Hobbits. Martin and the others then go to confront Jimmy. Jimmy reveals that he is merely trying to make life better for people by giving them a better, fantasy world. When Tyler discovered what he was up to, Jimmy lost focus and the people all died. Jimmy contends that they weren’t actual people, and didn’t matter. He says that they are no more real than he is. Jimmy and Martin then battle. Jimmy is subdued when Phillip smashes Jimmy in the face with his staff. Jimmy is exiled back to the future with new coding that prevents him from ever using another electronic again.

In the future, the police come into Martin’s parents’ house, but find nothing. Jimmy shows up a few hours later in a taxi, apologizes for everything, and then says he’s headed home. An old man on a bike in ragged clothing takes notes, including the license plate number of the taxi. As he rides away, all nearby cars and electronics stop working for a moment. The old man is Jimmy.

More summaries and resources for teaching or studying Off to Be the Wizard.

Off to Be the Wizard from BookRags. (c)2022 BookRags, Inc. All rights reserved.