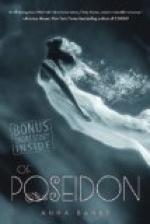 Anna Banks
This Study Guide consists of approximately 41 pages of chapter summaries, quotes, character analysis, themes, and more - everything you need to sharpen your knowledge of Of Poseidon.

Of Poseidon Summary & Study Guide includes comprehensive information and analysis to help you understand the book. This study guide contains the following sections:

This detailed literature summary also contains Topics for Discussion on Of Poseidon by Anna Banks.

"Of Poseidon" by Anna Banks is the story of Emma McIntosh, an eighteen-year-old girl who lives on the New Jersey shore with her mother. Her father, who was a doctor, died of cancer several years before. The story begins when Emma and her best friend, Chloe, are in Florida on a vacation with Chloe's family. As Emma walks along the beach not watching where she is going, she runs right into the chest of a young man. She is embarrassed by her carelessness and is afraid to look up at him. When she does, she sees the hottest guy she has ever seen! He has black hair, olive skin and violet-colored eyes. She herself also has violet eyes which she knows is very rare but that's where the similarity ends. She has naturally platinum colored hair and light skin.

The young man's name is Galen Forza, and he is as taken with Emma as she is with him. Chloe comes rushing up to them and is also "gaga" over the cute guy. Emma is rather shy and senses a strange awkwardness about the young man. He seems different. Emma apologizes for running into him, grabs her surfboard and is off. Emma and Chloe go surfing and Chloe takes quite a spill. As Emma is trying to get Chloe up on her surfboard, something bumps Chloe's leg, then bumps it again. Suddenly, Chloe is screaming for her life. She is being attacked by a vicious bull shark that drags her down to the ocean bottom. Emma screams for help but is too far away from shore for anyone to hear. She starts to paddle in for help but something comes over her. She must save her friend. Emma dives down to come to Chloe's aid.

Galen had been watching from shore and swims out to help. He watches as Emma, seemingly fearless, tries to pull Chloe out of the shark's mouth. Galen sees that Chloe is lifeless and has lost a lot of blood. Galen is about to go help Emma but he watches in amazement as Emma faces the shark and talks to it. It stops, turns and swims away. She is just the girl he's been looking for in more ways than one.

Galen is a Syrena which is similar to a merman although the Syrena hate that word. He was dispatched to Florida by a human animal biologist he knows who told him that there was a blonde girl in Florida who communicated with the fish at his aquarium and who had the distinguishing violet eyes of the Syrena. He strongly suspects that she is one of Galen's kind. Galen comes in search of this girl who turns out to be Emma. He follows her back to New Jersey, enrolls in her school and quickly becomes part of her life.

They begin to fall for each other but there's a lot that Emma doesn't know. She doesn't know that Galen transforms into a fish-man and is a prince, that she may be the missing princess of Poseidon, that the King of Titan may want to mate with her and, most of all, that she is part fish!

There are mysteries and twists and turns and ups and downs in their budding relationship but in the end the Syrena prince and the half-breed girl who is part human and part Syrena, learn that they love each other and will be together whether it is on land or sea.

More summaries and resources for teaching or studying Of Poseidon.

Of Poseidon from Gale. ©2005-2006 Thomson Gale, a part of the Thomson Corporation. All rights reserved.