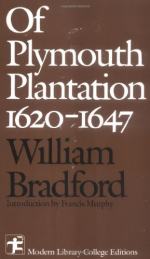 This detailed literature summary also contains Topics for Discussion and a Free Quiz on Of Plymouth Plantation, 1620-1647 by William Bradford.

Of Plymouth Plantation 1620-1647 by William Bradford is a work of non-fiction. The book, often recognized as one of the most accurate and valuable historical references in American history, details the arrival and settlement of the Puritans at Plymouth Plantation in 1620 and the subsequent years and hardships.

Bradford served as governor of Plymouth Plantation for thirty-three years, making him one of the foremost authorities on the creation of the settlement as well as its operations, government, purpose, and events.

The purpose for the emigration of the Separatists from England dealt with religious freedom and the persecution of those who would not adhere to the corrupt philosophies and laws of the church at that time.

The men and women who objected to the inclusion of men's inventions into the church were quickly known as the Puritans. The Puritans took issue with many ideals and philosophies held by the church that clearly went against the Bible and Christianity. When the people splintered from the Church of England and the Roman Catholic Church in order to return to the true ways of the faith, the religious community vehemently objected. The Puritans were threatened and eventually persecuted, despite the tolerance of Queen Elizabeth I.

After James I ascended to the throne, the persecution of the Puritans and their congregational church worsened. People were stripped of their worldly goods, arrested, tortured, imprisoned or killed. The Puritans finally decided that they would flee to Holland where it was known that the church could continue without the restrictions imposed by the crown. However, James had all feasible ports of entry blocked so that the Puritans had to pay a high price to be smuggled out of the country.

The Puritans practiced their religion in Amsterdam, and then Leyden, with little intervention. Although there were opponents to the church, the Puritans made a good name for themselves. The Puritans decided to leave Holland for fear that the Spaniards would take over and they would once again be persecuted. Traveling to America would ensure that the Puritans could have true religious freedom and worship as God would have it.

There was a great deal of corruption and hardship that surrounded the emigration, so much so that those of less faith and determination surely would have failed or given up on obtaining the right to worship in their own way.

Bradford's history dispels many myths and misinformation about Plymouth Plantation, its relationships to the Native Americans and the Virginia Colony, and the events surrounding the Pilgrims' first years in America.

There are thorough explanations of each step of the Pilgrims' journey, detailing the stories and events surrounding the journey to the New World as well as those who were involved, for good or ill.

In addition to the historical value of the book, it also gives the reader a deep sense of insight to the life and times of the people responsible for the settlement and how their commitment and values led to the establishment of one of the most respected and important colonies in America.