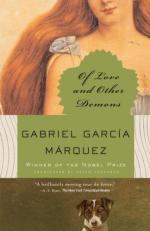 Of Love and Other Demons Setting & Symbolism

Gabriel García Márquez
This Study Guide consists of approximately 36 pages of chapter summaries, quotes, character analysis, themes, and more - everything you need to sharpen your knowledge of Of Love and Other Demons.

The Marquis's House, the Mansion

The Marquis's house, or mansion, is where the Marquis lives in town.

The city, the port, Cartagena

The city is only named in the preface as the modern city of Cartagena, Columbia. It is a port on the Caribbean Sea, which goes into the Atlantic Ocean.

Sierva lives and is raised in the slave quarters at the Marquis's mansion.

The Bishop's Palace is in deteriorating condition, with only several rooms kept open. The rest of the Palace is decaying and sealed off.

The Convent of Santa Clara

The Convent of Santa Clara is on the sea in town. It is where Sierva is imprisoned and where she dies. Also there are a group of nuns, led by the Abbess.

The Abyssinian female is a large and beautiful slave who is bought by...

More summaries and resources for teaching or studying Of Love and Other Demons.

Of Love and Other Demons from BookRags. (c)2022 BookRags, Inc. All rights reserved.