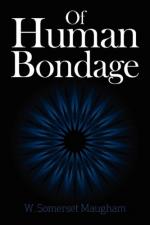 W. Somerset Maugham
This Study Guide consists of approximately 54 pages of chapter summaries, quotes, character analysis, themes, and more - everything you need to sharpen your knowledge of Of Human Bondage.

This detailed literature summary also contains Literary Precedents and a Free Quiz on Of Human Bondage by W. Somerset Maugham.

Of Human Bondage is the story of a young man's struggle to find the meaning of life in a world that is cruel. Philip Carey has a club foot, making him the subject of cruelty at school and ridicule in the adult world. Philip allows this treatment to warp his personality, making him introspective and solitary. Due to this, Philip suffers greatly in silence, aching only to find someone to love him without condition. It is a desire that is universal, making this novel one that readers of all ages will identify with.

Philip Carey is only five when his mother dies. Philip is taken to live with an aunt and uncle who are not used to children and do not know how to deal with him. Philip's uncle is self centered and strict, while Philip's aunt is unaccustomed to giving or receiving unconditional love. This situation makes Philip's childhood difficult, but not without affection. From his aunt, Philip develops a love of literature that he will carry with him the rest of his life.

At nine Philip is sent to boarding school. Philip finds school a harsh environment where his club foot is suddenly fodder for cruelty. Philip is teased and tortured over his deformity, causing him to shun the boys with whom he goes to school. When Philip finally makes a friend, this boy crushes his heart when he turns from him and then tells everyone that he was only kind to Philip because of his deformity. Philip cannot get out of school fast enough and eventually talks his guardians into allowing him to go abroad.

Philip goes to Germany where he finishes his studies in the home of a German professor and her husband. There Philip learns that God and religion are not absolutes and begins to embrace a new philosophy on the morality of life. When Philip returns home, he does not tell his uncle about his new outlook on life, but does announce he does not intend to enter Oxford or to become a clergyman like his uncle as had been expected. Instead it is arranged that Philip will become an apprentice with an accountant.

Philip works at this job for a year, but finds the work boring. Philip decides he would rather quit and move to France where he can learn to be an artist. Philip's uncle is against this decision and refuses to finance the move. Philip decides to go anyway. In Paris, Philip makes a great many friends. Among them is a young woman named Fanny Price who believes herself to be a great artist. Fanny is not a great artist, but Philip does not have the heart to tell her. When Fanny kills herself after becoming destitute and seeing no other future for herself, Philip begins to question his own devotion to his art. Philip feels he is a good artist, but he will never be able to make a living at it.

When Philip's aunt dies, he returns to England for her funeral. While there, Philip decides he will not return to Paris. Instead Philip decides he will go to London and study at the hospital where his father once worked. Philip wants to be a doctor. Philip enjoys his studies but is distracted from them when he falls in love with an unpleasant waitress. Philip knows this girl is below him and finds her unattractive, but he feels a passionate love for her that he cannot shake.

This girl, Mildred, does not return Philip's affections, but has no problem allowing him to take her out and buy her expensive things. Mildred even allows Philip the occasional kiss, making him feel as though there might be hope that one day she will fall in love with him. However, this dream is shattered when Mildred tells him she is to marry another man. Philip is heartbroken, but within a few months he has a new girlfriend. This girl is kind to him and makes him happy, even though Philip does not feel the same passion for her he felt for Mildred.

Mildred returns and Philip breaks the heart of the kind woman when he takes her back. Mildred is pregnant, so Philip pays for her keep until the baby comes. After the baby's arrival, Mildred meets a friend of Philip's and falls madly in love, leaving him once more. Philip throws himself into his work, only to come across Mildred again sometime later. Mildred is selling herself on the street, so Philip invites her to live with him. Philip insists that they remain just friends this time. Mildred is confused by this and determined to make Philip love her. When Philip refuses, Mildred leaves once more.

Philip invests his money in the stock market, hoping to make back some of the money he has spent on Mildred. However, the stock crashes and Philip ends up losing all his money. Philip finds himself living on the streets. A friend, Athelny, takes Philip in and helps him get a job in a shop. Philip works at this job until his uncle dies, leaving him enough money so he can afford to return to medical school. After becoming certified, Philip finds himself infatuated with Athelny's daughter. Philip decides rather than travel around the world, he would rather have a wife, a family, and love. Philip proposes to Athelny's daughter and is thrilled when she agrees.

More summaries and resources for teaching or studying Of Human Bondage.