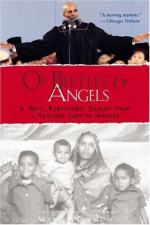 Of Beetles and Angels: A Boy's Remarkable Journey from a Refugee Camp to Harvard Summary & Study Guide

Selamawi Asgedom
This Study Guide consists of approximately 22 pages of chapter summaries, quotes, character analysis, themes, and more - everything you need to sharpen your knowledge of Of Beetles and Angels.

Of Beetles and Angels: A Boy's Remarkable Journey from a Refugee Camp to Harvard Summary & Study Guide Description

Of Beetles and Angels: A Boy's Remarkable Journey from a Refugee Camp to Harvard Summary & Study Guide includes comprehensive information and analysis to help you understand the book. This study guide contains the following sections:

This detailed literature summary also contains Topics for Discussion and a Free Quiz on Of Beetles and Angels: A Boy's Remarkable Journey from a Refugee Camp to Harvard by Selamawi Asgedom.

"Of Beetles and Angels: A Boy's Remarkable Journey From a Refugee Camp to Harvard" by Mawi Asgedom tells the story of Selamawi Haileab Asgedom or Mawi. He was a refugee who came to America when he was young. Through hard work and his father's influence, he became a Harvard graduate.

Mawi's mother took him on a long and hard trip through the desert when he was very young. They were traveling to Sudan to meet up with his father. For three years they lived in a refugee camp in Sudan and then they left for America.

The family was able to go to America as part of the World Relief Christian organization outreach. They were placed into a hotel in Chicago until the organization could find a church to sponsor them. They couldn't find anything in Chicago so the family moved to the suburbs where a church finally sponsored them. While they were living in the hotel, people from the churches came to take them around and introduce them to American culture. They also learned about American culture by watching television.

The family was extremely poor and Mawi's father pointed out to his children that they had to work hard in order to overcome the poverty and get an education. He knew that they would be able to get to college by getting scholarships if they were good academically. Even though they were poor, they always reached out to help others. Mawi's father insisted that angels were frequently mistreated because they didn't look like angels. Instead, they come in many different forms including vagrants and beggars. He called them beetles.

Mawi and his brother were very close. They both faced the challenges of school together. Because of their background and the color of their skin, they were often targets for bullying. Back in their home country, they were used to fighting. They fought against the bullies, trying to defend themselves, and were threatened with expulsion. Their father told them to turn away when others picked on them because surviving the academic world with their only way to get scholarships for college.

Mawi's father worked as a janitor, but he eventually again losing his sight and had to become unemployed. Mawi was frequently embarrassed by him, but as he grew older, he heard stories about his father from the old country. The man had been a wealthy doctor admired by many because he was always willing to help others. Mawi realized that his father was a hero. His other hero was his brother, who developed a wonderful heart as he grew older and reached out to help others as well. When his brother was a senior in high school, he was hit by a drunk driver and killed.

Listening to his father, Mawi worked very hard academically. He was also involved in sports, and he tried to befriend everyone, no matter what their social status. When he filled out his college applications, a school counselor encouraged him to applied to Ivy League schools. He was accepted to Harvard with a full scholarship. His father died before his graduation, killed by a drunk driver, just like his brother. At his graduation he reflected on his upbringing and realized how an awareness of community, always reaching out to help others, was the most important thing in life.

More summaries and resources for teaching or studying Of Beetles and Angels: A Boy's Remarkable Journey from a Refugee Camp to Harvard.

Of Beetles and Angels: A Boy's Remarkable Journey from a Refugee Camp to Harvard from BookRags. (c)2022 BookRags, Inc. All rights reserved.