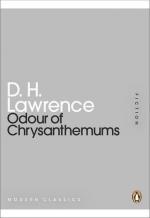 Investigate the condition of mines in England at the turn of the century. To what extent does the mine in "Odour of Chrysanthemums" function as a silent but forceful character?

Research the position of women in England in the early twentieth century. Is Elizabeth Bates's life-style common to those of other women at that time?

What references to the effects of environmentally unfriendly industrial practices can you find in the story?

Elizabeth Bates thinks her husband drinks too much. What kind of medical, social, psychological, or economic effects of alcohol abuse are revealed in the story?

In what ways is the death of Walter Bates foreshadowed in the story? What are the indications that a disaster is looming?

Examine the portrayal of the two children, John and Annie, in the story. How are they psychologically affected by the family situation in which...