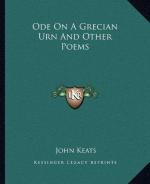 John Keats
This Study Guide consists of approximately 44 pages of chapter summaries, quotes, character analysis, themes, and more - everything you need to sharpen your knowledge of Ode on a Grecian Urn.

Keats's poetry is collected in a definitive edition printed by the Oxford University Press called The Poetry of John Keats. The first edition was published in 1939 and it was updated for the 1958 second edition (minor corrections are noted in the preface by H.W. Garrod).

Well-known British critic John D. Jump published a short volume in 1974 called The Ode, which traces the history of the poetic form from ancient Greece to the twentieth century, telling readers just about everything anyone would want to know about odes.

Another famous critic, this one American, is Cleanth Brooks, who published a book about poetic forms in 1947 called The Well-Wrought Urn. The title, of course, refers to this poem, although the author's study of Keats is only one out of eleven chapters. This book is invaluable to any student of formal poetry.

More summaries and resources for teaching or studying Ode on a Grecian Urn.

Ode on a Grecian Urn from Gale. ©2005-2006 Thomson Gale, a part of the Thomson Corporation. All rights reserved.