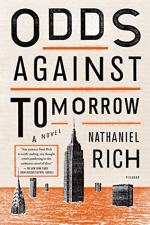 This detailed literature summary also contains Quotes and a Free Quiz on Odds Against Tomorrow by Nathaniel Rich.

The following version of this book was used to create this study guide: Rich, Nathaniel. Odds Against Tomorrow. Farrar, Straus and Giroux, New York. 2013. First Edition. After a first-person prologue set in the novel’s future, third person narration tells the story of statistics nerd Mitchell Zukor, who tries to outrun a distasteful past and a dangerous present in search for a future that he cannot clearly envision.

The narrator of “Brugada,” Chapter 1 of Part One, describes being in an undergraduate class with Mitchell when a devastating earthquake struck Seattle, Washington. As students fled the classroom, the narrator says, Mitchell took care of a student (Elsa) suffering the stress-triggered incident of a rare heart condition identified as Brugada Syndrome. The narrator also comments that after the earthquake the lives of himself, Mitchell, and Elsa all took them in separate directions. The language of this chapter suggests that the narrator is writing from a perspective some years after the fact, and some years after Mitchell became well known.

The remainder of the novel tells the story of Mitchell’s notoriety. It begins with a description of how an ambitious eagerness to please his father, a talent for research and statistical calculation, and a fear of natural disasters all lead Mitchell into a job with a New York company called Future World. Founded by an entrepreneur named Alec Charnoble, Future World specializes in counseling large businesses in how to avoid legal liability in the aftermath of natural disasters. Mitchell brings great success and profit to the company, so much so that Charnoble has to hire a second employee, a woman named Jane whose skill with statistics is as good as Mitchell’s, but whose work is not as defined by fear.

Just as business is really picking up for Future World, a tropical storm hits New York, causing torrential flooding and trapping Mitchell and Jane in Mitchell’s apartment. An escape attempt in a canoe that Mitchell had originally purchased as a work of art results in Mitchell and Jane making their way out of the devastated city and, eventually, finding their way to dry land. When they arrive at the refugee camp set up for people who have made their way out of New York, they discover that the rest of the country, and perhaps even the world, is hailing Mitchell as a prophet. Charnoble is desperate for Future World to get back in operation, but Mitchell has other plans: he is determined to track down Elsa who, according to their correspondence and her public reputation, has established a self-sufficient farm in the northern part of the country.

When Mitchell and Jane arrive at the farm, which Elsa had called Ticonderoga, they discover that Elsa has gone, and that the farm has been taken over by rampaging men angry that its promise of sanctuary is no longer available to them. Mitchell and Jane then return to the refugee camp. There, one of the other refugees makes secret plans to lead whoever wants to go into an area of New York known as the Flatlands – on the outskirts of the city, and cleaned up after the storm.

Mitchell and Jane accompany Cho into the Flatlands, but as Mitchell sets up a makeshift home, Jane realizes that she does not want to live a life away from the opportunities of New York, so she returns. Some months later she returns and finds that Mitchell has set up a relatively comfortable, relatively secure life for himself. His security is shaken somewhat when he learns that Elsa is interested in getting in touch, but it is not shaken so much that he wants to accept her invitation; he is determined to stay focused on his new life. Jane, meanwhile, starts to see value in how he is living and starts to imagine herself living that kind of life, in preparation for what seems to be the inevitable return of more natural disasters. There, the novel ends.