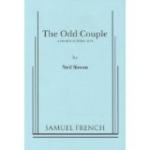 Compare the movie version of The Odd Couple with the television series. Which is more effective and why? How does each differ from the stage play?

Research to discover how rising costs have affected Broadway and how economic pressures have contributed to the dichotomy between commercial entertainment and art in American theatre.

Read several theoretical discussions that attempt to define comedy philosophically, as distinct from laughter, and then apply your definition of comedy to The Odd Couple, your favorite television sitcom, and to a Shakespearean comedy.