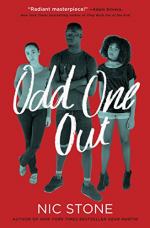 Odd One Out Summary & Study Guide

Nic Stone
This Study Guide consists of approximately 77 pages of chapter summaries, quotes, character analysis, themes, and more - everything you need to sharpen your knowledge of Odd One Out.

Odd One Out Summary & Study Guide includes comprehensive information and analysis to help you understand the book. This study guide contains the following sections:

This detailed literature summary also contains Quotes and a Free Quiz on Odd One Out by Nic Stone .

The following version of this book was used to create this study guide: Stone, Nic. Odd One Out. New York: Crown, 2018. The novel is broken into three parts - or books - told entirely from one of the three main characters - first Courtney, then Rae, then Jupiter. Each book contains ten chapters. For the purposes of this guide, each book is separated into two sections.

Book One, “The Game Plan,” is told from Courtney Cooper’s (Coop’s) first person perspective. It starts with Coop explaining his recent break up, and how he goes to Jupe’s house for the Jam, the song she plays for him when he breaks up with someone. He explains how he has been in love with Jupe since he and his Mom moved next door as a kid. However, Jupiter is gay and does not seem romantically interested. So they are just best friends who hang out and sleep together platonically. He tells his friends Golly and Britain about his break up but they tell him he needs a game plan to get over Jupe and to start dating a new girl. He spends time apart from Jupe, but starts having nightmares. He also notices her friend Breanna at her house which makes him jealous. That weekend his Mom has a party and invites a new family in town - Dr. Chin and his daughter Rae. Jupe and Rae are already close and Coop is jealous.

Coop invites Rae to try out for the cheerleading team, as she is talented, and accepted immediately. After practice one day they all attend a carnival together, but at the carnival Coop passes out. Afterwards, Rae helps him recover and they realize they have a lot in common - Coop lost his Dad as a kid and Rae’s Mom moved out. They also realize they both went to the Carl’s Carnival event in Alabama when they were kids and decide to find Carl together. Rae and Coop start to grow close. However, Rae and Jupe are also close and flirty with each other. Meanwhile, Coop feels confused about Jupe since she flirts with him - even sometimes checking him out but claims she has a crush on a girl. Rae calls Coop in the middle of the night to console her while her father is away and Coop likes to feel needed. Book One, and Coop’s perspective ends as he thinks he has a crush on Rae.

Book Two, “A Sesquipedalian Search for a Simplified-Science Savant” is told from Rae’s perspective (103). Rae wakes up in Courtney’s house feeling embarrassed. Thanksgiving night Rae drinks too much and asks Jupe if she can kiss her but Jupe says no. The football season ends and they party together, while Rae still feels like an outsider but loves being around Jupiter and Courtney. Rae and Courtney go on a Carl finding excursion together, and Courtney warns Rae not to try to hook up with Jupiter, and reminds her about Thanksgiving night, which Rae had been too drunk to remember. They visit Carl’s abandoned home, and find their family pictures inside. This reminds Rae of the past and how she misses her sister, and how she always feels left behind.

Christmas comes and all three families celebrate together at Jupiter’s house. When Rae comes home she finds her sister Bess waiting for her. At first she is angry, but Bess explains how their Mom needed her, and their Dad had persuaded Bess to go. On New Years Eve, Jupiter insists Rae’s attempt to kiss her was a drunken mistake, and Rae kisses her to prove it was not which angers Jupiter. They stay friends but it feels fake, and Rae grows closer to Courtney. Courtney also finds Carousel Carl - he has started Carl’s Closet - a secondhand clothing non-profit and Rae is pleased. Later, Bess tells Rae that Jupiter is in love with Rae, and she should tell Jupiter the truth. Then, Jupiter tells Rae they need to talk, but Rae cuts her off and tells Jupiter that she is in love with Courtney and going to tell him after his birthday. Book Two ends as she and Jupiter hug.

Book Three, “Another One Bites the Dust” is told from Jupe’s perspective (195). It begins as Jupe leaves Rae’s house upset that she was about to tell Rae she loved her, but Rae told her she is in love with Courtney. Jupe resolves that since she is about to lose both Rae and Courtney, to sleep with Courtney first, so they can be each other’s firsts. A week later they have sex and they tell each other they love each other. Jupe gives Coop her bracelet as his 18th birthday present. Soon after, Rae calls Coop to ask him out. Coop asks Jupe what to do and Jupe tells him to go for it, and they fight. Coop realizes that Jupe knew Rae’s plan all along and is angry. He starts dating Rae and Jupe is jealous.

Jupe goes out with Breanna and has sex with her. She enjoys it, but feels confused about her identity and label. Her relationship with Rae and Coop grows frosty. Jupe finally asks for help from Britain and Golly, who help her make and execute a game plan. She confesses to her LGBT group including Coop and Rae, that she likes boys too, but she does not know her label. Later, Jupe confesses to Rae that she slept with Coop and why. A few days later Coop, Golly, and Britain come over and bring her birthday present - a turntable and Queen records Coop got from Carl. Coop brings a letter from Rae in which she both forgives Jupe and asks for forgiveness. Coop then tells Jupe to cue the Jam - he and Rae are broken up. Jupe tells him she is not ready for a relationship yet, but they tell each other they love each other, and the novel ends as Jupe hits play.

More summaries and resources for teaching or studying Odd One Out.

Odd One Out from BookRags. (c)2022 BookRags, Inc. All rights reserved.