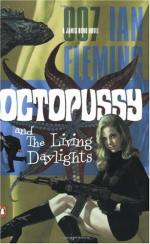 Ian Fleming
This Study Guide consists of approximately 42 pages of chapter summaries, quotes, character analysis, themes, and more - everything you need to sharpen your knowledge of Octopussy.

This detailed literature summary also contains Topics for Discussion and a Free Quiz on Octopussy by Ian Fleming.

Octopussy and the Living Daylights is a collection of four short stories by Ian Fleming, the creator of James Bond, agent "007". James Bond appears in all four stories and is the unifying thread in all four accounts.

Octopussy is a tale about the life of Major Dexter Smythe, who retired from the Royal Marines after World War II in Europe and went to live in Jamaica. When the story opens he is living in a small villa on the North Shore of Jamaica and continues to drink and smoke excessively, behavior that led to the accidental overdose and death of his wife Mary. His only interest in life is skin diving with the tropical fish that live on the reef just opposite the beach at his villa. He is fixated on the idea of making a pet of the octopus he has discovered in a hole in the coral reef. All his plans change when a man comes to visit him from Government House. The visitor is James Bond, and he questions Major Smythe about his activities in the Austrian Tyrol at the end of the war when he was with an intelligence group called the Miscellaneous Objectives Bureau. Bond's questioning leads to Smythe's recollection and finally to his admission of guilt in the matter of the murder of an Austrian guide called Hannes Oberhauser. In the course of Smythe's recollections, the reader also becomes aware of the source of the Major's personal wealth.

When Bond leaves the Major he points out that he will be arrested within the week to return to Britain to face a court martial. Dexter Smythe returns to the reef and his octopus, and to conduct an experiment to feed it a scorpion fish to the octopus and note its reaction. In the course of the afternoon, Major Smythe suffers a bizarre and gruesome end. The official verdict is that it was a death by drowning, but the reader knows that it was a combination of poisoning by the scorpion fish and drowning as a result of the deadly embrace of his "Octopussy".

The next two stories are in the familiar format of James Bond being sent on assignments to deal with problems that have arisen in the affairs of the Secret Service. The first involves the identification of the KGB's Resident Director and controller of a double agent within the Secret Service. The agent is to be rewarded for her work by being sent a Fabergé Emerald Sphere that she has supposedly inherited and that the KGB controller will be underbidding at its auction at Sotheby's in Bond Street. The narrative includes a masterful account of the world of fine art and the drama and pageantry of the auctions at Sotheby's.

The Living Daylights is set in Cold War Berlin. Bond is sent to neutralize a KGB marksman called "Trigger", who will try to gun down an escaping allied agent when he attempts to cross over to the West from East Berlin. In the course of the three day stakeout, James Bond becomes infatuated with a tall, blond girl who, as part of an all woman orchestra, carries a cello case in and out of the building where the KGB marksman is posted. The climax of the story is skillfully depicted. The agent successfully escapes, the true identity of the KGB marksman is revealed, and Bond, just for once, partially misses the shot for which he has so assiduously prepared.

The final piece, 007 in New York is, as the publisher's note explains, an attempt to counteract an article written by Ian Fleming that was very critical of New York. The writing is lighthearted, and comprises James Bond's description of his favorite restaurants and hotels in New York while he is on a twenty-four hour assignment in that city. The plot is minimal, to say the least, but it does add another piece in the jigsaw puzzle of the true personality of the man called James Bond.

More summaries and resources for teaching or studying Octopussy.