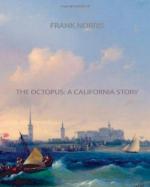 Airplanes and trucks, neither of which existed when this story took place, have significantly changed the influence of rail freight. Research the different types of shipping used to move grain today, explaining what power each has.

California is not associated with wheat production today. Research the decline of the California wheat industry and report on how other concerns have taken its place.

Aid agencies to help people stranded without money are common in most big cities. Report on what a person like Mrs. Hooven, alone with her little girl and penniless in a city, could do today.

Magnus Derrick sees his plows on a railroad car at his local station, but he cannot have them until they travel...