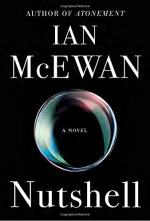 Ian McEwan
This Study Guide consists of approximately 25 pages of chapter summaries, quotes, character analysis, themes, and more - everything you need to sharpen your knowledge of Nutshell.

This detailed literature summary also contains Quotes and a Free Quiz on Nutshell by Ian McEwan.

Nutshell by Ian McEwan is a modern retelling of William Shakespeare’s classic play Hamlet. However, in this adaptation, the role of Hamlet is essentially played by an in-utero child within Trudy’s (this version’s Gertrude) womb.

The novel begins with the narrator learning that Trudy and Claude (this version’s Claudius and the narrator’s uncle) plan to kill John, Trudy’s estranged husband and the narrator’s father. This causes the narrator to become furious. Even though the narrator has never met his father, he respects his intelligence. In this section of the book, the reader also learns that the narrator, while not quite born, is wiser than many full-grown people. He is able to make inferences about the outside world and the actions of other people through his knowledge of Trudy’s biological responses and his hearing.

The narrator is rather uncomfortable with Claude, as he has struck up an affair with Trudy. Eventually, the reader learns that Claude and Trudy intent to poison one of John’s smoothies with anti-freeze, plant items in his car to make the death look like a suicide, and wear his hat to the smoothie store as to make it look like John had bought the smoothie himself. Prior to the day of the murder, John brings one of his poet friends, and seemingly new girlfriend, to his home (which Trudy and Claude now live in). John informs Claude and Trudy that he knows about the affair and requests that they move out of his house so he can move back in. They refuse because they want to sell the multi-million-pound home after John is dead. Later, during Claude and Trudy’s sex, the narrator attempts to hang himself with his own umbilical cord.

The next day, John visits again. Claude and Trudy successfully poison his smoothie and trick him into drinking it. John leaves, and not long after, the police inform Trudy that John is dead. Initially Trudy shows a cold response to the news but later breaks down. Claude informs Trudy that they can either get rich together or be poor in separate prisons.

A Chief Inspector soon arrives to question the pair. They spin a story that John was depressed and how the death must have been a suicide. The Inspector plays along for a time until she reveals John’s gloves (which the murderers would hope explain to the police why no fingerprints appeared on the anti-freeze bottle). The Inspector tells them they he could not have worn the gloves, as they were full of spiders.

Claude and Trudy panic and attempt to leave the country. Just as they are about to leave the house, the narrator decides that he wants to be born. Claude initially wants to leave Trudy behind but is forced into helping with the birth. The narrator is born, the police arrive, and the novel ends.

More summaries and resources for teaching or studying Nutshell.