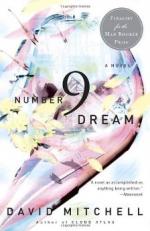 David Mitchell (author)
This Study Guide consists of approximately 53 pages of chapter summaries, quotes, character analysis, themes, and more - everything you need to sharpen your knowledge of Number 9 Dream.

This detailed literature summary also contains Topics for Discussion and a Free Quiz on Number 9 Dream by David Mitchell (author).

Eiji Miyake and his twin sister, Anju, are the illegitimate children of an affair between their mother and a married man. Raised by their grandmother, they have little contact with their mother, and they do not know the identity of their father. Following Anju's death at the age of eleven, Eiji rejects his mother entirely and becomes obsessed with discovering the identity of his and Anju's father.

Now nineteen, Eiji has come to Tokyo to follow his only lead, Akiko Kato, but he is turned away, when he attempts to see her. When he writes to try and set up an appointment, she rejects him utterly. With no other avenues available, Eiji tries to contact his mother, who has recently written him from a mental health clinic for alcoholism and depression. By the time he calls, however, she has checked out.

Eiji's next leads turn out to be bad ones. Due to a harmless lie told by someone else, Eiji is mistaken for the son of a prominent, corrupt police chief and is kidnapped by a yakuza boss. Further complicating matters and even confusing Eiji into believing that his father is a gangster, yakuza bosses are referred to as "Father." By the time Eiji realizes his mistake, he is already entangled in a violent yakuza war and barely escapes with his life and all his body parts.

Eiji's first real lead comes in the form of a letter from his grandfather on his father's side. Eiji meets his grandfather, who pretends to be a family friend, and is given a journal that belonged to his great-uncle during World War II. He also learns that his grandfather has little respect for Eiji's father, thinking him dishonorable and unscrupulous. However, when they agree to meet again in one week, Eiji hopes his father will be present.

Here, the idea of meaning comes to the fore. Eiji's meaning thus far has been to find his father, but reading his great-uncle's journal opens up new perspectives for him. Also influential is the new relationship he is developing with Ai Imajo, a waitress he has met. All the people around him, in fact, seem to have found some kind of meaning in their lives, and Eiji is beginning to question the validity of his own goal. When he is ambushed by his stepmother, his father's legitimate wife, at the meeting he had planned with his grandfather, Eiji finally gives in to her insistence that he stop searching for her husband, but Eiji's surrender is prompted by his own feelings, not by his stepmother's threats.

Eiji is working as a cook in a pizza kitchen, his third job in Tokyo, when his mother calls him at work. She has returned to the clinic. Ai Imajo has already suggested that Eiji try to reestablish a relationship with his mother, and when his mother mentions that she is planning to marry an old friend, Eiji decides to visit her. Then, during Eiji's last shift at the pizza kitchen, an order comes in for a unique pizza to be delivered to the law firm where Ms. Kato works, and the name on the order is the same as Eiji's grandfather's surname. The order was placed by Eiji's father, Daisuke Tsukiyama, who turns out to be a partner in the same law firm. Eiji volunteers to deliver the pizza, and this is how he meets his father, as a pizza boy.

The meeting is anticlimactic. Eiji is supremely disappointed with the kind of man his father turns out to be, exactly as his grandfather described, and he does not even reveal himself. He delivers the pizza, and after a bit of small talk, he leaves.

But Eiji's search for his father has helped him begin to reconnect with his mother, and he has built a group of caring friends in Tokyo. As Eiji travels to see his mother, he has a number of dreams in which the importance of all these people becomes evident. The meeting with his mother, as he later reports to Ai, is neither comfortable nor uncomfortable. "Fragile" would be the proper word. He plans to visit his uncles and see Anju's tomb before meeting his mother again, and he is unsure when he will return to Tokyo. He wants to try and help his mother recover from her depression and alcoholism, and he wants to meet her fiancy.

On the way to his hometown, Eiji encounters a typhoon that almost seems like another dream. He weathers it in garden shed, and when he reaches his grandmother's house, no one is home. This is a repetition of the scene in which he returns home from his overnight trip as a boy: when he arrives, he finds everyone gone, then falls asleep, only to discover, when he wakes, that Anju has gone missing during his absence. Almost immediately, he knows his twin sister has drowned. In the present, Eiji again falls asleep and is later awakened by a radio news flash. There has been a massive earthquake in faraway Tokyo. Eiji imagines all kinds of devastation. He cannot reach Ai or any of his friends by phone. He opens the door and begins running.

More summaries and resources for teaching or studying Number 9 Dream.