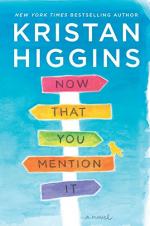 Related Topics
Now That You Mention

Now That You Mention It Summary & Study Guide

Kristan Higgins
This Study Guide consists of approximately 54 pages of chapter summaries, quotes, character analysis, themes, and more - everything you need to sharpen your knowledge of Now That You Mention It.

Now That You Mention It Summary & Study Guide Description

Now That You Mention It Summary & Study Guide includes comprehensive information and analysis to help you understand the book. This study guide contains the following sections:

This detailed literature summary also contains Quotes and a Free Quiz on Now That You Mention It by Kristan Higgins.

The following version of this book was used to create the guide: Higgins, Kristan. Now That You Mention It, Harlequin Books, 2017.

Now That You Mention It opens the night Nora Stuart, a gastroenterologist on duty at Boston Medical Center, gets hit by a Beantown Bug Killer van while on the way to get pizza for the emergency room team, a member of which is Bobby, Nora’s boyfriend. Semi-conscious in the hospital, Nora overhears Bobby flirting with Jabrielle, one of the ER's residents. While recovering from her wounds, which are not life-threatening, Nora tells Bobby it is over and that she wants to return home to Scupper Island, which is a ferry’s ride from Boston.

When Nora arrives at Scupper Island, Nora vows to find out what happened to her father, who disappeared years earlier, and to repair her relationship with her sister. At the ferry dock Nora meets her mother, Sharon, who gives her a cold welcome and tells her the news that Lily has been arrested and is in jail on drug charges. Some days pass, and as her mother has been treating her coldly, Nora decides to rent an apartment. She goes to the real estate office and winds up renting a houseboat in Oberon Cove. Upon leaving the real estate office, Nora goes to a donut shop and runs into Sullivan Fletcher, a good-looking former classmate of hers who is the twin of Luke Fletcher, a formal rival of Nora.

Nora and Luke had been friends at one time, but they had a falling out when Nora beat Luke at getting a scholarship to Tufts. As a result of his failure to get the scholarship and threatening Nora with physical violence, Luke got suspended and wound up doing drugs with Sullivan and getting into a car accident that caused Sully to have brain damage and hearing loss. After meeting Sullivan, Nora remembers her pubescence, how lonely she was without Lily but how she found a way to succeed while in college. The next day, Nora takes Poe to the houseboat, where they meet Audrey, Sullivan’s daughter. When the lights in the Oberon Cove go off that evening, Sully comes to check on Nora and tells Nora to beware of Luke. That evening when Nora goes to bed, she remembers something she calls the “BBE” (Big Bad Event), where she was attacked by a strange man in her apartment.

While on Scupper Island, Nora needs to visit Boston every week to allow Bobby time with Boomer, their dog. At each of the visits, Bobby tells Nora that he wants to be with her. Nora is torn, but she begins dating Sullivan. After one of their dates, Sully walks Nora to her houseboat, and Luke is on the dock and threatens Nora not to go near his family. Despite this threat, Nora sees Sully again and goes to his house and has sex with him. The sex is awkward, though, so she tells him they should just be friends, a decision which is reversed when the two have a picnic on Sully's boat and Nora realizes the two really are a couple.

Nora gets a phone call, and it is Audrey, who tells her that Poe is missing. As it happened, Poe had discovered that Lily was sentenced to more prison time for stabbing an inmate in jail. Nora finds Poe at a cave where Lily and she used to play, and Nora tells Poe she will stay on Scupper Island, and Poe can come live with her. On the evening of an event Nora help organize, called Go Far, Be Strong, Nora gets attacked by Luke on her houseboat. Nora fights back, though, and Boomer jumps in to save her. The epilogue happens a year later, when Poe is celebrating passing her driver's test, and Nora is happy, in a relationship with Luke, and surrounded by Poe’s friends and her family and friends.

More summaries and resources for teaching or studying Now That You Mention It.

Now That You Mention It from BookRags. (c)2022 BookRags, Inc. All rights reserved.