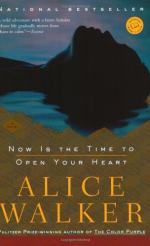 Now Is the Time to Open Your Heart Summary & Study Guide

Now Is the Time to Open Your Heart Summary & Study Guide includes comprehensive information and analysis to help you understand the book. This study guide contains the following sections:

This detailed literature summary also contains Quotes and a Free Quiz on Now Is the Time to Open Your Heart by Alice Walker.

The following version of this book was used to create this guide: Walker, Alice. Now Is the Time to Open Your Heart: a Novel. Random House, 2004.

Now is the Time to Open Your Heart is a novel written by Alice Walker. The story is told from the perspective of a limited narrator who focuses on the thoughts and actions of the protagonists Kate and Yolo.

The novel opens with two quotes reflecting on the concepts of dreaming and living a life off the beaten path. Author Alice Walker then directly tells the reader that her paternal grandmother, Kate Nelson, was murdered when her father was a young man. She goes on to say that “this novel is a memorial to the psychic explorer she might have become” (1).

In the first chapter, Kate is at a meditation retreat. She enjoys the meditation until a group lesson in which her teacher makes comments about Afro-Caribbean revolutions does not sit well with her. After this, Kate cannot help but notice how white the entire mediation retreat is being taught, both in terms of the people in attendance and the philosophies. She skips the remaining sessions and opts to meditate alone, under a tree.

The experience causes Kate to recall a story told to her by an old woman at a Black Freedom Movement meeting many years ago. In the story, a man comes across a frozen snake on the road. The snake tells the man that if he picks him up and thaws him, he will not bite the man. The man takes pity on the snake and puts him in the pocket of his overalls, where the snake thaws. The snake then bites the man, sending him to his death. The woman explains that the tale is about how one’s own nature and the nature of others never change--regardless of appearances.

In “Changes,” Kate struggles both mentally and physically. She feels changes caused by age happening in her body, but there is also an unexplained mental change that she is incapable of articulating. Her friends encourage her to take a trip to the Colorado River with the hope that she will find some clarity. When Kate embarks on the voyage, she leaves behind Yolo, her lover and housemate. At first, they both seem to think that Kate’s departure will mean the end of their relationship. Yet, soon after she leaves, Yolo realizes he cannot imagine his life without Kate in it.

In “He Wondered,” Yolo contemplates his own role in the world and the course of his life. He clearly has his own questions about the meaning of his life, but he lacks the level of self-awareness Kate has in order to begin answering these questions. Meanwhile, Kate’s trip to the Colorado River helps her work through the traumas of her loveless, first marriage to an abusive husband. She and the other woman on the trip spend time discussing aging and what it means to be a woman as you grow older and are expected to maintain a youthful appearance. One woman, Sue, inspires Kate to take a vow of celibacy and begin exploring life outside of sexual relationships.

Soon after returning from the Colorado River, Kate embarks on another spiritual journey. This time, she heads to a rain forest retreat in South America, along with several others. The group is led by a shaman named Armando as they prepare to drink the hallucinogen Ayahuasca, which is referred to as the “Grandmother medicine.”

Meanwhile, Yolo takes a vacation to Hawaii. On his first day, a local asks him for help. Yolo ends up watching the body of a dead local boy while the man goes to get the boy’s family. After this incident, Yolo struggles to enjoy his vacation. He is filled with thoughts of his former girlfriend, Alma, who was Hawaiian. The locals come and take the boy’s body away. Yolo rents a car and decides to drive to more remote areas of Hawaii. In a small village, he comes across a funeral procession that turns out to be for the dead boy.

On her retreat, Kate is grappling with the fact that, after the first session, the Grandmother medicine has ceased to work for her. Still, she sits with the others as they continue their journeys. Kate has even started assisting Armando in guiding others through their visions. First, she helps a woman named Lalika, who is struggling with the aftermath of an incredibly traumatic situation in which she and her friend Gloria were raped. Lalika killed the rapist. Then, the women were thrown into a back-country jail where they were held against their will and raped by guards and inmates.

Lalika tells Kate that, during their captivity, she and Gloria began praying to Saartjie Baartman, a woman whom they read about in an issue of Jet magazine. Saartjie was a South African woman who was kidnapped and put on display in Europe, as her African facial and body features were considered strange. The women are able to find comfort in Saartjie, and they soon call each other by the name.

In Hawaii, Yolo realizes that the mother of the dead boy was none other than Alma, his ex-girlfriend. She arrives at the funeral on a motorcycle, carrying an urn of ashes. Later, they go back to Alma’s home, where Alma explains that the boy died of a methamphetamine overdose. She also explains that she rides the motorcycle as a tribute to her father, who loved James Dean.

In the coming days, Yolo becomes more integrated into the local Hawaiian culture. He attends a group meeting with other Hawaiian men, led by a mahu called Aunty Pearlua. Aunty describes her disappointment at the disappearance of Native Hawaiian culture and of how the people of Hawaii have utterly lost their connection to the land around them in favor of partaking in industrial culture and imported goods.

Kate goes on to help guide Hugh, a man who is wracked with guilt over the fact that his ancestors stole land from Native Americans. Hugh explains how, each year, an old Native man would arrive on his property. The man would ask to visit a spring. When the land was later excavated by an energy company, they discovered a massive burial ground below the spring.

Next, Kate works with a man named Rick. He is experiencing a similar form of guilt, this time relating to the fact that his family was responsible for infiltrating Black communities with crack cocaine. He did not realize this until he was an adult. Now he lives with a paralyzing guilt and regret for a childhood filled with excess.

Finally, the group all works together to help a woman named Missy overcome the trauma of being sexually abused by her grandfather from a very young age until she was ten years old. Soon after, the group departs from the retreat. A sense of contentment and closeness hangs around them all.

On her return flight home, Kate is overcome with a revelation that she is not actually the biological daughter of her father. Instead, she realizes, she is the product of an affair her mother had. Though Kate cannot confirm this, she feels sure of it.

When Kate and Yolo are reunited, they immediately begin sharing many details from their respective trips. Kate realizes Yolo has quit smoking, and he explains he has done so in solidarity with the teachings of Aunty Pearlua. He has a tattoo on his hands that expresses a commitment to the teachings. Still, Yolo breaks and Kate catches him smoking and crying in the bushes outside the house. She does not reprimand him; instead, she comforts him. They share fears about their relationship. Ultimately, they agree to get married.

They prepare for the wedding, to which they invite all of those they met on their travels. They plan to have it at the perfect spot they find alongside a river. Meanwhile, Kate is reinvigorated as a writer, and begins attempting to record all of Grandmother’s teachings.

One afternoon, Kate is visited by Armando and a group of shamans. They are en route to Washington, D.C. where they plan to petition against a pharmaceutical company that is attempting to patent ayahuasca. Kate writes a letter of support that they take with them to aid their cause.

In the final scene of the novel, Kate and Yolo clean their house and prepare for the wedding, which will be in two days. Kate goes to her altar, which she destroyed early in the novel in an act of frustration. Here, she reconstructs the altar with intention, paying careful attention to each piece of its makeup. Finally, she places a small, snake-shaped clock in the lap of the Buddha statue.

Now Is the Time to Open Your Heart from BookRags. (c)2022 BookRags, Inc. All rights reserved.