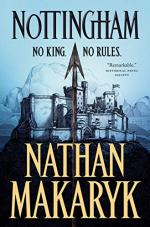 Nathan Makaryk
This Study Guide consists of approximately 108 pages of chapter summaries, quotes, character analysis, themes, and more - everything you need to sharpen your knowledge of Nottingham.

Acre is the first setting of the novel and a city within the Holy Land where the English are fighting to gain footing before any other European country can. It is here where readers are introduced to several of the main characters, Robin, William, and King Richard. The city of Acre is only featured in the first part of the novel but it is important in illustrating how several major players within the novel are already so removed from the plight of their subjects.

Sherwood Forest in Nottinghamshire is originally set aside for the king and it is against the law to hunt anything within it. However, this law does not stop Marion's refugees from setting up camp deep within the forest and using it to hide from the Guards of Nottingham. Sherwood Forest is essential to all of the other common...

More summaries and resources for teaching or studying Nottingham.