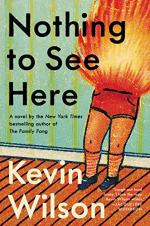 Kevin Wilson
This Study Guide consists of approximately 35 pages of chapter summaries, quotes, character analysis, themes, and more - everything you need to sharpen your knowledge of Nothing to See Here.

Nothing to See Here Summary & Study Guide includes comprehensive information and analysis to help you understand the book. This study guide contains the following sections:

This detailed literature summary also contains Quotes and a Free Quiz on Nothing to See Here by Kevin Wilson.

The following version of this book was used to create this study guide: Wilson, Kevin. Nothing to See Here. New York: HarperCollins Publishers, 2019.

The novel’s main story takes place in the year 1995. Lillian Breaker is 28 years old, lives with her mother, and works minimum wage jobs. One day, she receives a letter from her friend Madison Roberts (maiden name Billings) to visit her in Franklin, Tennessee. The novel briefly flashes back to the early 1980s. Lillian grew up in an impoverished household and was raised by her negligent, unloving mother. Lillian was a high achiever in school and managed to receive a scholarship to an upscale preparatory boarding school. There, she and Madison met as roommates. Madison was born into a very wealthy family. When Madison was caught with drugs, her father bribed Lillian’s mother to frame Lillian. Lillian was expelled instead of Madison. They remained friends and corresponded via mail over the following 14 years. It is revealed later in the novel that Lillian actually has romantic feelings towards Madison.

The focus shifts back to the main narrative, in 1995. Lillian arrives at Madison’s mansion home in Franklin, Tennessee. Madison is married to Jasper Roberts, a United States Senator. Madison has political ambitions of her own; she likely hopes to use Jasper’s political career to springboard her own. Madison and Jasper have a young son named Timothy. Madison explains to Lillian that she is jasper’s second wife. Jasper had two children with his previous wife, Jane. Jane recently died of suicide, and the twins will soon be brought to Jasper and Madison’s house. The twins—Bessie and Roland—are ten years old, and when they become very agitated, they inexplicably burst into flames. Madison wants to keep that fact secret, as she worries that it will hurt Jasper’s political career. She wants to hire Lillian to be the twins’ live-in nanny for the following three months or so. Lillian accepts out of loyalty to Madison.

Lillian soon meets the twins and sees firsthand that they do in fact burst into flames whenever they are agitated. The fire does not harm the twins, but it can harm other people. Lillian forms a rapport with the twins and teaches them breathing exercises to help them control their emotions. Over the following weeks, Lillian and the twins grow closer, and Lillian even develops deep affection for them. One day, the Secretary of State suddenly dies, and Jasper is appointed as the replacement. Madison decides that she, Jasper, and Timothy will move to Washington, D.C., and that the twins will be sent to a boarding school. Soon after, Jasper states that the twins will actually be sent to an institute for troubled children. Lillian flees with the twins, and they hide in Lillian’s mother’s house for a few days. Jasper and Madison soon discover their whereabouts. Madison then offers to let Lillian be the twins’ de facto guardian, and Lillian happily accepts.

More summaries and resources for teaching or studying Nothing to See Here.

Nothing to See Here from BookRags. (c)2022 BookRags, Inc. All rights reserved.