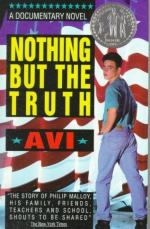 Nothing but the Truth Summary & Study Guide

Avi and Edward Irving Wortis
This Study Guide consists of approximately 37 pages of chapter summaries, quotes, character analysis, themes, and more - everything you need to sharpen your knowledge of Nothing but the Truth.

Nothing but the Truth Summary & Study Guide Description

Nothing but the Truth Summary & Study Guide includes comprehensive information and analysis to help you understand the book. This study guide contains the following sections:

This detailed literature summary also contains Topics for Discussion on Nothing but the Truth by Avi and Edward Irving Wortis.

At the beginning of the book, Philip Malloy is obsessed with making it on his school’s track team. He wants to impress his father and also improve his chances of going to college. He likes most of his classes, math best of all, but despises Miss Narwin’s English class. Phil does not see the point in reading the classic book, The Call of the Wild, and butts heads with Miss Narwin every step of the way. After a sarcastic answer on an exam, Phil receives a “D” as his term grade for English – a grade that prevents him from trying out for the track team. Phil immediately blames Miss Narwin for his bad luck and is angry when he learns she will also be his homeroom teacher for the spring term.

Miss Narwin is facing her own challenges as the story begins. As she desperately tries to get a grasp on contemporary teaching, she bemoans the fact that her students do not appreciate, or even care about, literature the way students in the past have. She requests funding from the school district to attend a summer course to improve her student interaction. When she is denied the funding, Miss Narwin becomes discouraged and angry at the lack of concern the administration shows. Though Phil Malloy does not take her course seriously, Miss Narwin believes Phil has potential and hopes she can break through his tough wall and help him succeed.

The morning announcements are always broadcast through the wall speakers during homeroom at Harrison High School. The first day Phil is in Miss Narwin’s homeroom, he hums along to the playing of the national anthem over the intercom. Miss Narwin asks him to stop. Phil believes his action is no big deal, but Miss Narwin cites a school memo asking students to stand in a respectful silence during the national anthem as her reason for asking him to be quiet. The first time Phil stops reluctantly. After telling his parents about the incident, and being told by his father he should stand up for his rights, Phil continues to hum along to the national anthem in homeroom. Miss Narwin throws him out once. When she throws him out a second time, the assistant principal threatens Phil with suspension. When Phil refuses to apologize to Miss Narwin, he is suspended for being sent to the principal’s office twice in the same week for the same offense. Miss Narwin disagrees with Phil’s suspension, but the assistant principal insists that “a rule is a rule.”

Phil’s mother is upset that he acted up and got suspended, but Phil’s father blames Miss Narwin and is outraged his son was suspended for being patriotic. Phil, and his father Ben, go over to tell their neighbor the story. Ted Griffen, who used to chase Phil off his lawn, is running for the school board and Ben believes he should know what happened to Phil. A reporter is at Ted’s house doing an interview for the school board elections and she ends up interviewing Phil and Ben Malloy about his suspension. She writes an article for the local newspaper presenting a one-sided view of Phil’s suspension and also paints the incident to be about squelching patriotic freedom, not a discipline issue. The people of Harrison Township are outraged, stoked by Ted Griffen who is making the rounds using the incident as leverage to win his school board election campaign.

A national wire service picks up the local story and condenses it to one paragraph, declaring Phil to be suspended for being patriotic and placing the blame solely on Miss Narwin. Newspapers around the country begin calling Harrison High School and telegrams and letters begin arriving, asking for Miss Narwin’s resignation. The school board and administration, feeling pressure because of the upcoming school budget election, begin to twist the truth of the incident and school policy to save face. As a result, Miss Narwin becomes the scapegoat and is asked to take a leave of absence. Phil is overwhelmed by all of the attention he receives as a result of the national coverage, and becomes stressed at the teasing by, and disapproval of, his peers. When Phil realizes he will not be able to improve his grade in Miss Narwin’s class or join the track team, he tells his parents he wants to switch schools.

At the end of the book, Miss Narwin makes the decision to resign, the school district budget is defeated, and Ted Griffen is elected to the school board. Phil leaves Harrison High School to attend Washington Academy, a private school with no track team. In the final lines of the book, Phil admits he does not even know the words to the national anthem.

More summaries and resources for teaching or studying Nothing but the Truth.

Nothing but the Truth from BookRags. (c)2022 BookRags, Inc. All rights reserved.