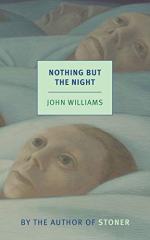 Nothing But Night Summary & Study Guide

Nothing But Night Summary & Study Guide includes comprehensive information and analysis to help you understand the book. This study guide contains the following sections:

This detailed literature summary also contains Quotes and a Free Quiz on Nothing But Night by John Williams.

The following version of this text was used to create this study guide: Williams, John, Nothing But the Night. Vintage, 2018. Kindle AZW file.

Nothing But the Night, by John Williams, follows one day in the life of Arthur Maxley, a listless and unhappy young man who, after an unanticipated meeting with his estranged father, relives a tragedy from his past that causes catastrophic consequences for Arthur in the present.

The novel begins with an unnamed man waking up from a dream to discover that he is at a party. The dreamer observes one of the guests at the party who is sitting alone, not talking to anyone else. The dreamer recognizes the man and knows that he always behaves the same way at parties: either remaining aloof from everyone else or starting vicious, unprovoked arguments with other guests. The other guests at the party begin to attack the isolated man and the dreamer is pushed towards him. When they touch, the dreamer and the isolated man merge into the same person, and the dreamer realizes that he has been observing himself.

Arthur Maxley woke up from this dream and decided to go for a walk in the park. Once outside, Arthur changed his mind and went into a café instead where he ordered an egg. When the egg arrived, something about the way it looked deeply unsettled Arthur and he left without eating it. He returned to his apartment.

At the apartment, the housekeeper, Judy, told Arthur that she had a letter for him and Arthur tried to take it from her as she playfully resisted. The letter was from Arthur’s father, apologizing for not being in touch for so long, and inviting Arthur to meet him at his hotel later that day. Arthur recalled an incident while he was at college in Boston in which an unexpected telephone call from his father had caused Arthur to have a breakdown, in which he repeatedly cried the word “mother”. Arthur called the hotel and left a message for his father agreeing to meet him later on.

Arthur had lunch with a friend named Stafford Long. Stafford asked Arthur if he could borrow some money and Arthur became very angry when Stafford suggested that Arthur should ask his father for the money. Stafford left the restaurant and Arthur was asked to leave by the staff.

Arthur went to the Regency Hotel to meet his father, Hollis Maxley. Hollis admitted how lonely he was and asked Arthur if they could help each other recover from their grief. A woman named Ellen interrupted them, which upset Arthur. It transpired that Hollis was dating the woman and that he had dated many women all of whom looked like Arthur’s late mother. Arthur was disgusted by this and left the hotel.

After wandering the city streets for a while, Arthur was drawn towards a door by the sound of music. He entered the door and found himself in a nightclub. He gradually became aware that a woman was watching him. She approached his table and introduced herself as Claire. The two danced together and became very drunk. A performer named Volita took to the stage and the passionate intensity of her dancing caused Arthur to have a vivid flashback to his childhood. Arthur remembered a night as a child when he had heard his parents shouting at each other. He crept downstairs and witnessed his mother shooting his father before turning the gun on herself.

Back in the present day, Arthur, shaken by the vivid recollection of his mother’s suicide, told Claire that he wanted to leave the nightclub. Claire suggested they should go back to her place. At Claire’s apartment, Claire got undressed and she and Arthur started kissing. The overwhelming emotions and memories of the day became too much for Arthur to bear and, losing control of his emotions completely, he began repeatedly hitting Claire in the face. Claire screamed until her landlord arrived and marched Arthur out of the building.

Outside, the landlord criticized Arthur’s behavior and beat him up as retribution for attacking Claire. The landlord went back inside, leaving Arthur bleeding and alone in the street. Arthur walked away into the night.

Nothing But Night from BookRags. (c)2022 BookRags, Inc. All rights reserved.