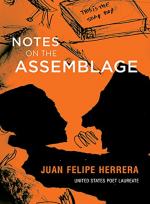 Plot Summary
+Chapters Summary and Analysis
Prologue – Part 1, “ayotzinapa”
Part 2, “the view with no one”
Part 3, “hard hooks”
Part 4, "lucid and undecipherable tasks"
Part 5, "i do not know what a painting does"
Part 6, “borderbus”, Section 1
Part 6, “borderbus”, Section 2
Part 7, “we are remarkably loud not masked” and Epilogue
Free Quiz
Characters
Symbols and Symbolism
Settings
Themes and Motifs
Styles
Quotes
Order our Notes on the Assemblage Study Guide

Juan Felipe Herrera
This Study Guide consists of approximately 46 pages of chapter summaries, quotes, character analysis, themes, and more - everything you need to sharpen your knowledge of Notes on the Assemblage.

Notes on the Assemblage Summary & Study Guide includes comprehensive information and analysis to help you understand the book. This study guide contains the following sections:

This detailed literature summary also contains Quotes and a Free Quiz on Notes on the Assemblage by Juan Felipe Herrera.

The following version of this book was used to create this study guide: Herrera, Juan Felipe. Notes on the Assemblage. City Lights Books. San Francisco, CA. 2015.

The poems are written in a variety of styles, some with both Spanish and English translations. For the most part, poems are written without punctuation or capitals. In the analysis, a “/” indicates an unpunctuated line change, while extra spaces between words is an attempt to reproduce how the poet has arranged the poem on the page.

A Prologue introduces the idea that “it,” perhaps freedom or independence or revolution, can begin with the clearing away of clouds, a metaphoric representation of externally imposed beliefs or value systems that can prevent an individual from seeing both the true nature of his / her suffering, and the opportunities for transforming that suffering. The collection proper then begins with its first part, titled “ayotzinapa,” which takes its name (and tone) from a poem referring to the disappearance of a large number of students on their way to protest the poor treatment of teachers.

Part 2, “the view with no one,” takes its title from a poem in which the speaker refers to an experience of peace and connection while working in the kitchen of a monastery. While there are other, similarly potent images of peace in Part 2, their power is heightened by juxtapositions with images of violence and near death experiences. In Part 3, writing about such experiences evolves into writing about actual death: the several poems in this section refer to the influence of, and the experience of losing, several individuals who seem to have served as inspirations to the author-poet-speaker in terms of politics, art, life, or all the above.

The brief Part 4, perhaps paradoxically, contains one of the collection’s lengthiest poems, “The Soldier in the Empty Room,” which is also one of the few poems in the collection that actually contains elements of narrative, or storytelling. Part 5 then leads the reader into contemplations of the relationship between the art of poetry and the art of painting, with its explorations of what painting can mean in general, and specific explorations of the meaning of particular works of art. Several poems here are identified as having been inspired by the work of individual painters.

Part 6, “Borderbus,” is the lengthiest in the collection. It contains several poems of similar length, and with similar narrative elements, to “The Soldier …”, and also contains several poems that have some of the most overtly political writing in the collection. Both “Borderbus” and “The Soap Factory” clearly, pointedly, and vividly explore racially defined tensions of the sort that, throughout the collection, suggest the need for, and value of, revolution to both defuse those tensions and change the exploited, devalued status of Spanish-speaking Latinx immigrants to the United States. Meanwhile, a parallel to those experiences is drawn in “I am Kenji Goto,” a poem about an executed Japanese journalist whose individual actions in support of the vulnerable can be seen as echoing the sort of rebellious, counter-exploitation actions espoused by the author-poet throughout the collection.

The idea of revolution in action resounds throughout Part 7, “We Are Remarkably Loud Not Masked,” which again evokes the experience of a particular revolutionary and which again explores the value of standing up, and embodying, individual identity and values in the face of oppression. Finally, in what might be considered the collection’s epilogue, “Poem by Poem” honors the memory of nine people killed in a racially motivated attack, and makes the suggestion that societal and revolutionary change can be taken, and needs to be taken, step by step, even if those steps take the form of poetry.

More summaries and resources for teaching or studying Notes on the Assemblage.

Notes on the Assemblage from BookRags. (c)2022 BookRags, Inc. All rights reserved.