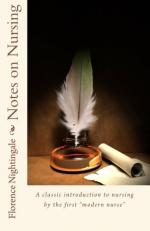 Florence Nightingale
This Study Guide consists of approximately 10 pages of chapter summaries, quotes, character analysis, themes, and more - everything you need to sharpen your knowledge of Notes on Nursing.

This detailed literature summary also contains Topics for Discussion on Notes on Nursing by Florence Nightingale.

First published in 1860, "Notes on Nursing" is a guide on how to think like a nurse. The definition of nurse was much different than what it is today. Florence Nightingale's statistics show that there were two kinds of nurses. Domestic servants, who also took care of someone in the home and professional nurses, who worked in hospitals. Her statistics show that more than half of the nurses acting also as domestic servants ranged in age from five to twenty years old. One can imagine that a five-year-old could use any instruction available. Most of her instructions may seem common sense today, but were revolutionary then. The challenge to provide nursing service as she recommends remains as relevant today as it was then.

Miss Nightingale starts with the fact that at one point in everyone's life they will be in charge of taking care of a sick person. She states that her intent with this book is to offer hints to help a person become an effective caregiver. She makes a point of stating that this book is not an instruction book on how to be a nurse. She encourages the readers to figure this out on their own. She also makes a point of stating that she offers no professional medical advice, stating clearly that this is the job of the doctors.

The first part of the book starts with a theory that disease and sickness is a "reparative" process. They are the body telling the mind that it needs something it is not getting. These could be fresh air, warmth, quiet or a clean environment. It is in providing these that the role of the nurse comes into play. Historically, it was believed that any woman had the skills to be a nurse. Miss Nightingale argues that the skill of an effective nurse have never been defined, much less inherited or taught.

At the time Florence Nightingale was a nurse, there were arguments against nursing. Nursing was thought to be an act of prolonging the inevitable, that it went against nature and the will of God. Florence Nightingale argues this point on two fronts. First, if man-made environmental factors are causing the person to stay ill, then there is no sin in taking man-made means to correct the environmental factors. The second point is this: In terminal cases where it is just a matter of time till the patient expires, nursing that patient is not futile. The reason is because it is important in the medical profession to segregate the illness from the environmental factors. This serves the purpose of observing the illness in an isolated environment so that it may be more clearly understood so that a remedy may be devised.

To those women who think they are not nurse material, Miss Nightingale tasks them with the death rate of newborns due to poor household hygiene and asks what mother would not do all she could to ensure the health of her baby.

More summaries and resources for teaching or studying Notes on Nursing.