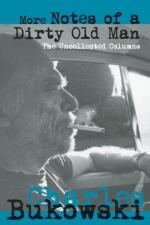 Charles Bukowski
This Study Guide consists of approximately 37 pages of chapter summaries, quotes, character analysis, themes, and more - everything you need to sharpen your knowledge of Notes of a Dirty Old Man.

This detailed literature summary also contains Topics for Discussion and a Free Quiz on Notes of a Dirty Old Man by Charles Bukowski.

Notes of a Dirty Old Man, by Charles Bukowski, is a combination of poetry and short stories that not only shocks the senses but enlightens the mind. Bukowski, a self proclaimed alcoholic, womanizer, and rebel, writes his prose in a way that is honest, pure, raw, and sensual, while being crass and heartless at the same time. The works in this book are actually articles Bukowski wrote for his column of the same title in a newspaper in L.A. called Open City. As Bukowski himself explains, many were written while intoxicated, and most contain a blend of true experiences and the darker portion of Bukowski's mind. The stories follow Bukowski around the country as he writes his work, drinks, stays in boarding houses, and experiences the darkest corners of humanity. Along the way, however, readers see a light in Bukowski that is well hidden, but that creates within him a duality of good and evil which appears in many of his stories.

In addition to seeing the underbelly of America, Bukowski introduces readers to some of the greatest writers of his time in a personal and up close manner. His stories of drinking with Kerouac and other writers not only provide readers with insight into Bukowski's societal life, but also allow readers to see rare moments in the lives of other famous poets and authors. Further, it is through conversations with such authors that Bukowski really brings light to his true feelings about the world around him, and about his own existence.

While difficult to read for those who are easily offended, Notes of a Dirty Old Man is not only a wonderful novel, but one of honesty and raw talent rarely seen in writing today. Bukowski's crass and brutal look at the world, tempered with his occasional lapse into the poet's care, leaves readers with an overall sense of adventure, and a moment of grateful appreciation for the lives they lead. Brilliant in its simplicity, Notes of a Dirty Old Man is a book for those who want a darker view of the world in which we live.

More summaries and resources for teaching or studying Notes of a Dirty Old Man.