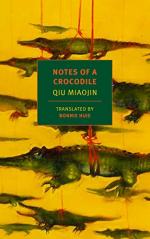 Qiu Miaojin
This Study Guide consists of approximately 41 pages of chapter summaries, quotes, character analysis, themes, and more - everything you need to sharpen your knowledge of Notes of a Crocodile.

Notes of a Crocodile Summary & Study Guide includes comprehensive information and analysis to help you understand the book. This study guide contains the following sections:

This detailed literature summary also contains Quotes and a Free Quiz on Notes of a Crocodile by Qiu Miaojin.

The following version of this book was used to create this study guide: Miaojin, Qui. Notes of a Crocodile. The New York Review of Books, 2017.

The anonymous, first-person narrator picks up her diploma. It is 1991 in Taipei, Taiwan. She is writing the rest of the novel. Immediately, she discloses she is a lesbian and introduces her first love, Shui Ling.

The narrator enrolled into National Tsing Hua University and moved into an apartment on Wenzhou Street in 1987. The narrator transferred into Shui Ling's Intro to Chinese Lit class and they began "a clandestine form of dating" (19). Though, the narrator soon distanced herself from her first love out of fear for these overwhelming feelings for a woman. She returned to her soon to apologize and get back together.

The narrator introduced a boy, Meng Sheng, whom she met in a fiction workshop at arts camp in 1987. He returned to her life in 1988, during the narrator’s first winter vacation. He threatened her to see him and when she did not initially comply, he sent her a bloody fingertip. They bond and begin a sporadic friendship.

At the end of the narrator’s first year of school, May 1988, the narrator has broken up with Shui Ling and moved from Wenzhou Street. The narrator relocated to a house with her cousins and threw herself into Debate Society duties and drinking to avoid her heartbreak. At orientation, two first-years, Zhi Rou and Tun Tun, enchanted her with their wit, and Tun Tun affectionately nicknamed her Lazi.

The narrator moved again, this time to an attic on Tingzhou Road. Amid her extracurricular obsession, the narrator established camaraderie with her club office neighbor, Chu Kuang. One day, after a violent outburst with Meng Sheng, his lover, Chu Kuang broke down and quarantined himself in the office. The narrator consoled him, developing a kinship between them.

The narrator, feeling her emotions slipping, reached out to Tun Tun, “an emotional turning point” (99) for the narrator, who tended to shut her off from everyone in her life.

Meng Sheng requested the narrator accompany him to Chu Kuang’s dorm room on April Fool’s Day, the anniversary he saved Chu Kuang from killing himself. Chu Kuang burst into tears, and the other two follow suit. The three share a moment of complete understanding.

At the conclusion of her sophomore year, on her 20th birthday, a new president took over Debate Society and the narrator takes a trip with her journals and Shui Ling’s letters, hitting an emotional nadir, contemplating suicide.

The narrator’s third year of college, 1989, commenced and she ran into Shui Ling and tried to win her back. Shui Ling broke the news that she was seeing another woman.

Shui Ling and the narrator continued to interact with one another, sharing one more positive, intimate meeting. The narrator, feeling worse, started burning herself. In the last time they see one another, the narrator bequeaths Shui Ling her first-year journal, the one documenting their relationship.

Now the narrator’s senior year, she sexually experimented with men in an attempt to deny her sexuality. In one such trial, she and Meng Sheng had sex. The narrator then fell in love for the second time with an engaged, older woman, Xiao Fan. Xiao Fan asked her to move into her apartment. They had sex once, the only time the narrator actualized her sexual desires. Growing distant, they argued. One day, spiraling deeper into depression and isolation, the narrator is called to the hospital: Xiao Fan’s hepatitis flared up and her fiancé left her. The narrator saw her to break off their relationship.

On graduation day, Shui Ling called the narrator, who hangs up on her. She sought out Meng Sheng, who was alone shooting up drugs in a nearby phone booth. They end up in a shouting match in which she accused him of being a coward when it comes to love. She fled from him.

More summaries and resources for teaching or studying Notes of a Crocodile.

Notes of a Crocodile from BookRags. (c)2022 BookRags, Inc. All rights reserved.