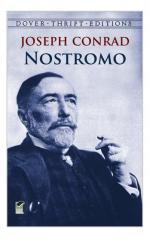 Nostromo, or Our Man, is an Italian sailor whose personal charm and organizational powers make him the cherished pet of the aristocracy of a fictional Central American country called Costaguana. After risking his life repeatedly, Nostromo comes to realize that he is just a pawn in the political and personal struggles of this fictional land. His plans for revenge parallel the so-called democratic movement of the richest province of Costaguana to become an independent nation ruled by the same aristocratic elite that has used Nostromo for their own gain.

Sulaco is a port city in the fictional country of Costaguana. Costaguana has had a turbulent history, including long stretches of tyranny and dictatorship. President Ribiera is elected to a five-year term and secures a lot of foreign investment for the country. Because Sulaco is the industrial center of Costaguana, the aristocracy of the area supports Ribiera and his foreign connections. Some of the most influential supporters are Charles Gould, who owns a silver mine, and Captain Mitchell, who runs the local shipping company.

Captain Mitchell's foreman is called Nostromo, a corruption of the Italian for "Our Man." Captain Mitchell sends him out on personal favors for the aristocracy of the region. He counts on Nostromo's loyalty and treats him like a servant. Nostromo welcomes the attention and thinks that he is an important member of the community. However, his friends, the Violas, feel that the rich are using Nostromo and that he has degraded himself by serving them so loyally.

General Montero overthrows President Ribiera. The town leaders of Sulaco side with Ribiera and organize a military to defend him. They recruit Martin Decoud, a Costaguana native raised in Paris. Martin helps them write a revolutionary newspaper and arm the soldiers with modern weapons. While the town leaders are adamant about supporting Ribiera, Decoud suggests that the Occidental Province declare independence from Costaguana in order to protect its commercial interests.

At the approach of Montero's army, Sulaco is thrown into violent rioting. Mr. Gould is worried about a shipment of silver. Nostromo and Decoud are given the task of taking the silver on a secret boat to keep it out of enemy hands. They leave on this dangerous mission and end up on a small island. Nostromo leaves Decoud on the island with the silver and returns to Sulaco, where everyone thinks that they are dead and that the silver has been lost. Nostromo is now disenchanted with the aristocracy and makes plans to keep the silver. He takes on another dangerous mission to bring information to the silver mine that leads to the eventual independence of the Occidental Province.

The independence movement happens very quickly, and soon the Occidental Province becomes the Occidental Republic with the help of foreign investors and supporters. Nostromo keeps the secret of the hidden silver, slowly transferring it piece by piece. During this time, he also finds love with Giselle Viola, the daughter of his old friend and keeper of the lighthouse on the same island where the silver is hidden. A case of mistaken identity results in Nostromo's death as he sneaks around the island visiting his new love, Giselle, and his old love, the hidden silver.