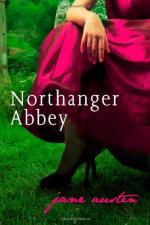 Jane Austen
This Study Guide consists of approximately 50 pages of chapter summaries, quotes, character analysis, themes, and more - everything you need to sharpen your knowledge of Northanger Abbey.

This detailed literature summary also contains Topics for Discussion and a Free Quiz on Northanger Abbey by Jane Austen.

The young Catherine Morland accompanies The Allens, her older neighbors, to Bath for a month of vacation and healthful rest. There, she meets her brother's love interest Isabella Thorpe. While Isabella pursues her relationship with Catherine's brother, Isabella's own brother John Thorpe unsuccessfully courts Catherine. Instead, Catherine meets and falls in love with the older Henry Tilney and is befriended by Henry's sister Eleanor. From Bath, Catherine accompanies Eleanor to the Tilney family estate at Northanger Abbey where she spends about a month in happy pursuits. Due to an innocent misunderstanding with Eleanor's father, Catherine is forced to depart Northanger Abbey, but the resolute Henry pursues her to her modest family home and proposes marriage—which is eagerly accepted.

Catherine Morland is a seventeen-year-old woman living with her parents and siblings in Fullerton. Previously a gawky tomboy, she has recently emerged as a beautiful young woman with proper behavior and burgeoning social skills. The Allens are a childless but affluent local couple who invite Catherine to attend them on their summer holiday to Bath for a month of healthful rest. With her parents' consent, Catherine accompanies the Allens to Bath. There, she attends various social functions and gradually widens her circle of acquaintances. Early in her stay, Catherine meets and befriends Isabella Thorpe. It develops that Isabella is enamored with Catherine's brother James. Further, Isabella's brother, John, takes a fancy to Catherine and deludes himself into thinking his feelings are reciprocated. In fact, Catherine finds John irritating and instead develops feelings for Henry Tilney, a wealthy young clergyman of considerable reputation.

While Catherine attempts to befriend Henry's sister Eleanor, James and Isabella pursue their relationship and become engaged. Meanwhile, John attempts to drive off Henry and claim Catherine as his betrothed. A series of John's egregious misrepresentations almost causes Henry to recede but a determined and heroic Catherine sets matters aright. Catherine receives an invitation to accompany the Tilney family to their considerable estate known as Northanger Abbey. Just as they leave Bath, Isabella begins to flirt with another suitor who is richer than James. At Northanger Abbey, Henry and Catherine fall in love while Catherine develops some rather peculiar but humorous theories about various people because she is emotionally overwrought from reading Gothic romance novels. Henry, fortunately, sets the record straight. After a month at Northanger Abbey, Catherine and Eleanor are fast friends and Catherine and Henry are in love.

Then, John again intrudes and viciously maligns Catherine to Henry's father. Henry's father reacts by ejecting Catherine from his home and she travels in shame back to her family in Fullerton. An angry Henry defends Catherine to his father and then pursues her to Fullerton where he proposes; the marriage awaits only Henry's father's approval. Meanwhile, Eleanor marries her secret love, a wealthy nobleman. Her good fortune encourages her father and finally he assents to Henry and Catherine's marriage. The novel ends with the two protagonists entering into the state of marriage.

More summaries and resources for teaching or studying Northanger Abbey.