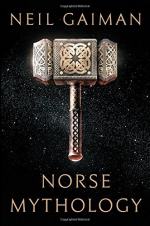 The following version of this book was sued to create this study guide: Gaiman, Neil. Norse Mythology. W.W. Norton and Company, 2017

The first chapter gives information about the three main figures in Norse mythology: Odin, his son Thor, and his adopted son Loki, all of whom are Aesir, which is the name of the gods of Asgard. The next chapter relates the Norse creation myth, beginning with the formless mists and fires that form the giants and the nine worlds. The giants give birth to the first gods, and Odin is among them. Odin creates human life in the world called Midgard, and he also builds a wall separating Midgard from Jotunheim, the world of the giants, who are the enemies of the Aesir. The next chapter discusses Yggdrasil, the life-giving world tree that stretches throughout the cosmos. This chapter also lists the nine realms of Norse mythology, each of which is inhabited by a different group of creatures. This is followed by a brief chapter concerning the story Odin sacrificing his eye for the attainment of great wisdom.

The next chapter tells a story in which Loki shaves the head of Thor’s wife, Sif, as a prank. Thor forces Loki to remedy the problem, so Loki goes to visit dwarves who are also master craftsman. He convinces the dwarves to create treasures for the gods. The following chapter tells a story with a similar pattern of Loki creating a problem and then fixing it. A mysterious man comes to Asgard and proposes to build an impenetrable wall around it. In exchange, he asks for the hand of the goddess Freya in marriage. Loki convinces the Aesir to agree to the bargain but to only give the builder his payment if he completes the task in six months. The builder, who turns out to be a giant, nearly completes the task, but Loki uses trickery to foil the giant. Loki is also a central character in the following chapter, which tells the story of Loki’s affair with a giantess and the three evil children to whom the giantess then gives birth.

In the next chapter, an ogre lord named Thrym steals Thor’s hammer and says he will give it back if he is allowed to marry the goddess Freya. Thor and Loki go to the ogre’s castle in disguise; Loki is disguised as a maidservant, and Thor is disguised in a wedding dress and veil, pretending to be Freya. In the banquet hall, when Thrym brings out Thor’s hammer, Thor picks it up and slays the ogres. The subsequent chapter is one of the longest and most complicated in the novel, and it tells the story of the creation of a magical mead that gives anyone who drinks it the ability to create beautiful poetry. Odin steals this mead and brings it back to Asgard, and it is said that this mead is the source of all great poetry. In the next chapter, Thor and Loki travel to Jotunheim, the land of giants, where they are guests of a giant king named Utgardaloki. Utgardaloki challenges them to various competitions, which Thor and Loki appear to lose. However, Utgardaloki later reveals that he beat them only through the use of illusions.

In the following chapter, Loki is captured by the giant Thiazi, who lets Loki go only after he has promised to steal the Aesir’s apples of immortality and give them to Thiazi. Loki does so, after which he is forced by the Aesir to retrieve them. Loki does so, and the Aesir kill Thiazi. The next chapter tells the story of the god named Frey. He is a god of Asgard, but he falls in love with a giantess. In order to win her love, he gives away his magical sword, thus leaving him more vulnerable in the eventual advent of Ragnarok, the apocalypse of Nose mythology. The subsequent chapter tells the story of Thor’s visit to the giant Hymir. Thor and Hymir go on a fishing expedition together, and Thor nearly catches Jormungandr, the enormous serpent in the seas of Midgard.

The final three chapters form a nearly seamless narrative. The first of these chapters tells the story of the death of Balder, the mast beloved of the Aesir. Balder is killed due to mischief caused by Loki. In the next chapter, Loki flees Asgard to escape punishment for his crime, but the Aesir eventually catch him and punish him by killing Loki’s son and then imprisoning Loki for eternity. The final chapter tells of Ragnarok, the prophesied apocalypse of Norse mythology. Loki and his three remaining children escape their places of imprisonment and fight against the Aesir. Meanwhile, the world is consumed with fire. In the wake of all of this destruction, the world tree, Yggdrasil, breathes new life into the world, thus restarting the cycle of rebirth after the world’s death.