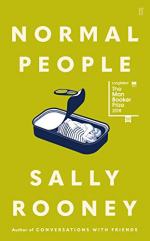 Related Topics
Color and Light
Unread Messages
Beautiful World, Where Are You

Sally Rooney
This Study Guide consists of approximately 46 pages of chapter summaries, quotes, character analysis, themes, and more - everything you need to sharpen your knowledge of Normal People.

The following version of this book was used to create the guide: Rooney, Sally. Normal People. Random House LLC, 2018.

In Normal People Marianne and Connell's secret high school affair evolves into a three year saga that explores the entrapping conventions of intimacy, gender normative roles, and the individual's capability to grow over time.

At the start of the novel, Marianne and Connell's friendship begins outside of school on the afternoons Connell picks up his mother Lorraine from her job housekeeping Marianne's home. Though the two are attracted to one another, Connell is hesitant to start a relationship with Marianne because he fears the judgment of his peers. The two agree to keep their affair hidden to preserve Connell's reputation, meeting up in the secret of Connell's home after school. Though they grow close quickly, Connell remains afraid to expose the truth of his feelings for Marianne to his friends. Shortly after he asks another girl to the dance, he and Marianne breakup.

After the summer ends, Marianne and Connell both begin school at Trinity College in Dublin. While Connell feels out of place and lonely, Marianne gains a large number of friends and significant popularity. Not long after running into each other at a party, the friends begin their affair once again. Although they do not keep it a secret, they resist labeling their relationship. Their dynamic is free and seemingly uncomplicated for several months. They remember how well they used to get along and find safety and comfort in their intimacy.

However when Connell loses his job on campus and is forced to return to Carricklea for the summer, their relationship falls apart once again. Instead of asking to live with Marianne, Connell waits to reveal his departure until days before returning home, even suggesting they see other people during the breakup. Hurt and humiliated, Marianne struggles to understand what went wrong.

Midway through the summer Marianne returns to Carricklea for her father's anniversary mass, and runs into Connell and Lorraine at the supermarket. When Connell tells her he wants to attend the mass with her, Marianne becomes hopeful that their friendship will return to normal. When the friends return to Dublin in the fall, however, Marianne is dating an sexually and emotionally abusive man named Jamie, and Connell begins a relationship with a woman named Helen. While they try to remain friends, their attachment for one another is undeniable. Connell attempts to defend his friendship with Marianne to Helen, and Marianne works to preserve her relationship with Jamie despite his cruelty.

After each receiving scholarships at the end of the year, Marianne and Connell begin traveling Europe with their respective friends. When they all meet up in Italy, the narrative tension tightens. Connell realizes the depth of his feelings for Marianne, and witnesses the extent of Jamie's abuse. Just after Connell breaks up an aggressive altercation between Marianne and Jamie, Marianne confesses the truth about her abusive family. Connell wishes he knew sooner and could better protect her from hurt. Marianne breaks up with Jamie after the trip, and loses the majority of her friends from Trinity.

The following fall, Marianne moves to Sweden and Connell returns to Dublin. Feeling isolated and lost, Marianne becomes entangled with another sexually manipulative man, Lukas. Meanwhile, Connell plunges into depression when his high school friend commits suicide. His relationship with Helen ends not long after the funeral. Several months later, Marianne and Connell both end up back in Carricklea and start up their former intimacy once again. When Marianne asks Connell to hurt her during intercourse and he refuses, she flees his house, feeling she has ruined everything and no longer knows who she is. Back at her home, her brother Alan bullies and injures her severely. Connell picks her up shortly afterwards and promises never to let another person hurt her.

In the months that follow, Marianne and Connell seem to achieve a newfound balance in their longtime relationship. When Connell reveals to Marianne that he has been accepted to an MFA program in New York, however, Marianne realizes she will have to let him go. She understands that the loneliness of missing him can never be as great as the former unworthiness she felt.

More summaries and resources for teaching or studying Normal People.