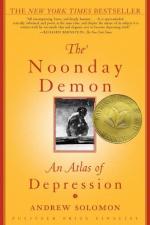 The Noonday Demon: An Atlas of Depression Summary & Study Guide

Andrew Solomon
This Study Guide consists of approximately 64 pages of chapter summaries, quotes, character analysis, themes, and more - everything you need to sharpen your knowledge of The Noonday Demon.

The Noonday Demon: An Atlas of Depression Summary & Study Guide includes comprehensive information and analysis to help you understand the book. This study guide contains the following sections:

This detailed literature summary also contains Topics for Discussion and a Free Quiz on The Noonday Demon: An Atlas of Depression by Andrew Solomon.

In the second section, Solomon describes each of his three breakdowns, describing his symptoms and treatments in detail in order to give his readers a first-hand view of depression. The third section explores treatment options that are available to depressives, going into specific detail for each, describing the types that are available, their effects on the brain, side-effects and uses. The fourth section, on alternative treatments, describes a multitude of treatment options for depressives that are not widely offered and perhaps not recognized by the medical field. However, many of these treatments have been proven effective for many patients. In performing research for the book, Solomon tried most of the treatments himself and was able to give his first-hand account and opinion on the effectiveness of each.

In the fifth section, on populations, Solomon further explores the different kinds of people who suffer from depression and how it affects each. He emphasizes that no two people have the same depression, since the disease affects everyone differently as it interacts with differing personalities. In the sixth section, on addiction, Solomon describes various case examples of people who suffered from depression and substance abuse. He also uses his own experience with alcohol to explain his belief that the interpretation of abuse is greatly affected by a person's surroundings.

In the seventh section, on suicide, Solomon's own experience plays a crucial role. In this portion of the book, he uses the example of his mother's suicide, in which he and his family took part, to convey his feelings on the subject. Solomon's mother had been mentioned earlier in the book, but it is in this section that the reader is able to fully understand how her illness and death affected Solomon and his depression.

In the eighth section, on history, Solomon describes the evolution of the term "depression" and the ideas surrounding the illness as they evolved from ancient times, when it was first discussed, to modern times. He emphasizes that, although it is a common assumption that depression is a modern ailment, this myth could not be further from the truth. The ninth section discusses the issue of depression among those also suffering from poverty. Solomon emphasizes the importance of this issue, one that seems to be almost entirely ignored in present discourse and research, though it is a problem that continues to grow and impact society. Solomon introduces many cases of impoverished individuals affected by depression and emphasizes the importance of treating depression among the indigent. He adds that, without correctional treatment, they will continue to be unable to work and therefore pose a strain on society.

In the tenth section, on politics, Solomon discusses the subject of depression as it is discussed in the government and by lawmakers and the public. The views on depression vary and the issue of coverage by insurance companies is an essential one that has continued to grow as it has been pushed by the wayside in Congress. The eleventh section, on evolution, discusses the role of depression in evolution. Evolutionists have studied the question of "why?" in regard to depression and Solomon introduces their findings and theories on the subject. In the final section, on hope, Solomon conveys the idea that there is a great deal of hope for those suffering with depression, bringing the subject to his own life, where he has managed to continue treatment and live a productive life after his depression, therefore giving others the hope to do the same.

More summaries and resources for teaching or studying The Noonday Demon: An Atlas of Depression.

The Noonday Demon: An Atlas of Depression from BookRags. (c)2022 BookRags, Inc. All rights reserved.