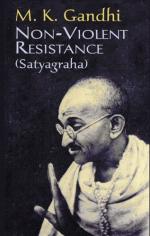 Mahatma Gandhi
This Study Guide consists of approximately 21 pages of chapter summaries, quotes, character analysis, themes, and more - everything you need to sharpen your knowledge of Non-violent Resistance.

Satyagraha is a compilation of the writings and philosophy of Mohandas Karamchand Gandhi, known also as Mahatma Gandhi, or in the honorific, Ghandiji. "Satyagraha" is also the name of Gandhi's philosophy and practice of nonviolent resistance and civil disobedience used to fight against the oppression of the Indian people by the British and Indian governments.

The term "Satyagraha" combines two Sanskrit words, "Satya" (truth) and "Agraha" (holding firmly to). Thus, Satyagraha literally means "holding firmly to truth." Satyagraha, in Gandhi's words, is "the Force which is born of Truth and Love or non-violence." It is more than mere civil disobedience because the struggle involved in Satyagraha is spiritual in nature.

Satyagraha aims not to coerce an opponent to obey the will of those who practice Satyagraha (Satyagrahis); instead, it aims to convert the wrong-doer in order to achieve true cooperation. Satyagraha also entirely rejects the use of violence in any circumstance; the Satyagrahi must be willing to die for love and truth. Throughout the book, Gandhi elaborates on the principles of Satyagraha, explaining how it is to be employed during civil disobedience, how Satyagrahis must live their lives, and how Satyagraha Campaigns must be conducted.

Gandhi (1869-1948) is a famous and world-renowned spiritual and political leader of India during its independence movement. His philosophy of Satyagraha not only produces Indian independence but inspires civil rights movements and freedom all over the world. In Indian he is understood as "Father of the Nation" and his birthday is still a national holiday, celebrated as the International Day of Non-Violence.

Gandhi begins using non-violence while practicing law in South Africa during the local Indian community's first push for civil rights; when he returns to India in 1915, he puts together protests of peasants, farmers, and city workers to fight exorbitant land-taxes and discrimination. He leads the Indian National Congress in 1921 and fights to reduce poverty, increase women's rights, heal tensions between religions and ethnic groups, end the notion of untouchability and promote Indian self-reliance. He tries to bring about Swaraj, or the elimination of the foreign domination of India. He also leads the famous Salt Satyagraha against the British-imposed salt tax. He spends some years in jail in both South Africa and India.

Gandhi practices ahimsa, a philosophy of love and truth, lives with few material resources in a small self-sufficient village and always wears traditional Indian garb that is home spun. He is a vegetarian and undertakes long fasts to purify himself and protest injustice. The book covers Gandhi's writings and interviews on all these subjects.

More summaries and resources for teaching or studying Non-violent Resistance.