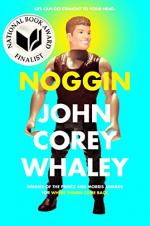 John Corey Whaley
This Study Guide consists of approximately 56 pages of chapter summaries, quotes, character analysis, themes, and more - everything you need to sharpen your knowledge of Noggin.

“Noggin” takes a somewhat fantastic premise (the reanimation of dead human tissue), familiar from famous works of fiction like “Frankenstein”, and gives it a contemporary, very human twist. Instead of focusing on the scientific and/or moral implications of such a potentially controversial form of defeating death, the novel focuses on the struggle that the beneficiary of such an experience faces when coming back to life.

In “Noggin”, that beneficiary is 16-year-old Travis Coates. Five years before the novel begins, as he lay dying from an untreatable lymphoma (cancer), he volunteered to be part of an experimental medical procedure that would see his healthy head removed from his unhealthy body; cryogenically frozen; and at some undefined point in the future, when medical technology made it possible, reattached to the healthy body of another volunteer (one with, as it turns out, an unhealthy head). The novel begins as Travis is waking up from the surgery that attached his head to the body of fellow teenager Jeremy Pratt, who died of an inoperable brain tumor.

Chapter-by-chapter, day-by-day, circumstance-by-circumstance, Travis returns to what has become his life. Five years after his death, technology has changed; his parents have removed all traces of who he was from his bedroom; and his friends have matured and taken on new lives. For Travis, however, his experience is that of having just woken up from a nap. For him, nothing is different, in terms of his expectations of friends and family, his knowledge and experience of the world, and his experience of having a body.

By far, the most difficult adjustment Travis faces in his new life is with his friendships. As he’s building a new friendship with the funny, outspoken, quirky Hatton, his girlfriend Cate has gotten engaged, while his best friend Kyle (who confessed to the dying Travis that he was gay) has physically matured and started dating girls. Travis feels strongly that Kyle is lying to himself, and puts considerable time and energy into convincing him to tell and live the truth. At first Kyle resists, but then breaks down and confesses to his current girlfriend, and to his parents, who he really is.

His success at convincing Kyle to face the truth seems to inspire Travis to intensify his efforts at convincing Cate that they can resume their relationship to the same degree, and on the same level, as when he died. Cate, however, is committed to her fiancé, even though she still cares deeply about Travis. As Travis becomes increasingly insistent, Cate becomes increasingly angry and upset, to the point where she is unable to even accept a kiss on the cheek. Finally, Travis tells her that she has to forgive him for feeling as he does: time has not passed for him, and given him the opportunity to grow beyond his feelings.

By far the most jarring / shocking truth about the present that Travis learns is that his parents, despite pretending otherwise, have been divorced for several years, having found it impossible to get over their simultaneous grief at his “death” and the lingering hope that he will come back to life. Eventually, Travis finds a way to both understand and live with all the new situations in his life, his new understanding and perspective symbolized and manifested by his emptying the ashes of his once fatally ill body onto the grave of the young man (Jeremy Pratt) who provided his as a substitute.

More summaries and resources for teaching or studying Noggin.