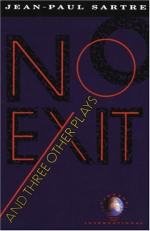 Get No Exit from Amazon.com
View the Study Pack
View the Lesson Plans
Study Guide
Order our No Exit Study Guide

Books Like No Exit by Jean-Paul Sartre | Suggested Reading

Jean-Paul Sartre
This Study Guide consists of approximately 45 pages of chapter summaries, quotes, character analysis, themes, and more - everything you need to sharpen your knowledge of No Exit.

Being and Nothingness, a nonfiction book published by Sartre in 1956 in translation, explicates his early theories on existentialism. It was originally published as L'Être et le néant in French in 1943.

Man and Superman is a play published by George Bernard Shaw in 1904. It is set in hell.

Devils, Demons, Death, and Damnation, is a book published in 1971 by Ernst and Johanna Lehner. It features images of hell throughout history.

The Victors, another play published by Sartre in 1948, also concerns a small group of people confined to a small room. They are French Resistance fighters who must decide the meaning of their own deaths. It was originally published in French as Les Morts sans sépulture, c. 1946.

Old Times, a play by Harold Pinter published in 1971, is centered around three characters. In a relatively unadorned set...

More summaries and resources for teaching or studying No Exit.

No Exit from Gale. ©2005-2006 Thomson Gale, a part of the Thomson Corporation. All rights reserved.